What is Beyond: Two Souls? 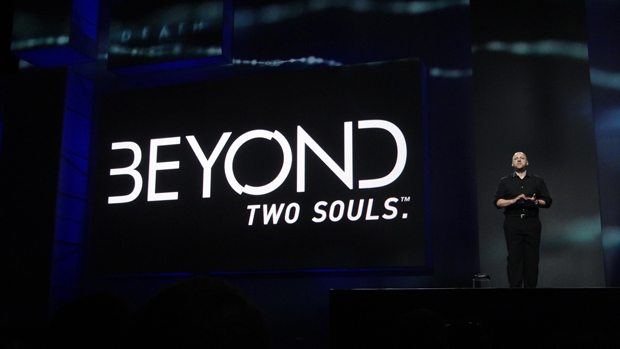 Sony dropped a bombshell at E3 2012 when David Cage appeared at their press conference to reveal Beyond: Two Souls. This will be his latest game with Quantic Dream, ever since Heavy Rain came and turned the gaming industry on it’s head back in 2010. It’s apparent that Quantic Dream has a very specific way of developing games. Ramp up the visual fidelity and tug on the heart strings through story-driven and mature-oriented content.

As revealed at E3 2012, Beyond: Two Souls is the story of Jodie Marsh and will follow her through the course of fifteen years and her ties to an entity named Eiden. Any self respecting game from Quantic Dream wouldn’t be complete without doing something different, and what we were shown at E3 2012 was exactly that.

Cage demonstrates the mischievous possibilities that being able to control a ghost can afford the player in a real world scenario.

You’ll control both Eiden and Jodie throughout your time in Beyond: Two Souls. As a ghostly entity, Eiden can move freely in the world surrounding Jodie. Getting into the things that only ghosts can do. In the demo, Cage demonstrates the mischievous possibilities that being able to control a ghost can afford the player in a real world scenario. It’s certainly a premise that we’ve never seen in a game before.

This is no tale of a mischievous ghost and their pal however. As the gameplay demo unfolds, Jodie is being chased by the police and will utilize Eiden’s supernatural abilities to escape a sequence where she is trapped aboard a train with officers closing in on her. At this point, it’s safe to say that Beyond: Two Souls is looking much less like Heavy Rain from a gameplay perspective. With less mundane tasks and ramped up intensity, Jodie’s escape from this moving train is nothing short of visually exhilarating. Using a protective shield from Eiden, she leaps from the moving train into the forest, where the chase continues.

Moving into a wider more open space, the movements in this playable demo look as if they were straight out of a cutscene, but we were assured that this was playable content. Each movement or action of Jodie has the look of a fresh animation, and adds an immense amount of realism to the chase that unfolds into a full scale attack by officers with guns and canine units.

The real gameplay kicker in Beyond hasn’t been revealed up to this point. We’ve seen some quick time events, and some environmental navigation, brilliant graphics, and an intense score. But the gameplay options that stem from Eiden have just been briefly touched on. When Jodie arrives at a police barricade, you begin to see these possibilities begin to flesh themselves out as Eiden is able to perform different actions on characters as denoted by an aura system. An orange aura means that Eiden can possess a character, causing just the distraction that Jodie needs to make her getaway.

Beyond: Two Souls incorporates a sandbox element into the gameplay

Fueled by cat and mouse chases up to this point, Jodie has finally been cornered and this is where the fun begins. Self described as the “sandbox” portion of the game, using Eiden can result in any number of outcomes for certain situations. Eiden can take complete control over SWAT members which included a sniper that got off as many shots as possible before being gunned down. Forcing a helicopter to crash, choking out enemies compeletely, or any other number of violent tactics are possible in this sandbox element. But, making enemies discharge their firearms on one-another seemed to be a popular way of dealing with a situation when the odds were turned against you. Though from the auras you could tell that there were various ways to deal with the situation.

Sony’s Press Conference left alot of questions unanswered for Beyond: Two Souls. If you were thinking that Quantic Dream’s next would be more Heavy Rain, you’re in for a surprise. It’s defintely got the same cinematic feel, but with a much brisker pace than its predecessor. For all PlayStation 3 fans, this is one title that you’ll want to be watching out for every little detail that arrives in the coming months, as they are sure to impress.