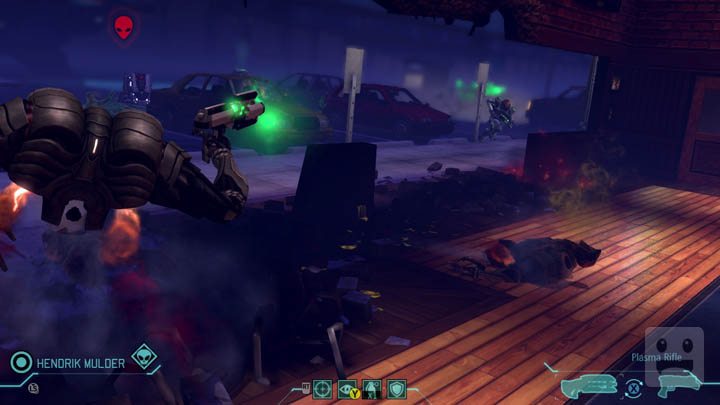 Pete Murray, Associate producer at Firaxis Games took us on a brief tour of XCOM: Enemy Unknown at E3 2012.  If you haven’t heard,  XCOM: Enemy Unknown  is the re-imagining of one of the greatest PC and strategy games of all times.  Staying true to the franchise roots, XCOM: Enemy Unknown is a completely turn-based strategy title, that tasks you with saving civilization from an enemy threat.  They’ve picked the right team for the job, XCOM: Enemy Unknown is in development by Firaxis Games, a revered development house in the field of turn based strategy.  Up to this point, mostly what has been shown to media is early game content, how you as the commander of a secret military organization, despite having the military best scientists and soldiers working for you, are just barely holding your own against this alien threat.

What we got to see in the demo is the evolution of these rookie soldiers.  How these rookies will become veterans, and how XCOM becomes a much more powerful force against these aliens.  This is precisely where 2K picks up during the behind closed doors showing at E3 2012. When the alien invasion begins in XCOM: Enemy Unknown,  it takes a series of abduction missions from around the world, but very quickly, those isolated abductions will turn into full scale attacks on Earth’s cities. That’s what we’ve responded to in this terror mission in the demo.

“These enemies are fast, dangerous, and pretty much as soon as you see one, its pretty much too late,” explains Murray.

Starting off by sending in the Beta Squad, Murray demonstrates the differences between a less experienced squad and one that has more powers to use at their disposal. Beta Squad is made up of rookies, they’re not doing well. They’re low on ammunition, they’re all wounded, and they’re facing a group of Chrysalids. “These enemies are fast, dangerous, and pretty much as soon as you see one, its pretty much too late,” explains Murray.  As the beta team gets picked off one by one. Murray shows us how these powerful enemies can dismantle an inexperienced group of XCOM soldiers. These powerful enemies like Floaters and Sectoid Commanders can use talents like mind control and other attacks to kill off your soldiers in short order.

Though as you progress in XCOM,  you’ll start to power up groups of soldiers. You’ve harnassed the alien technology and have the ability to turn it against your enemies. Queue Reaper Squad, a team led by none other than Sid Meier himself, that is outfitted with a variety of tools that can slice through a group of enemies with a variety of skills.  Now leading the Reaper Squad, Murray comes in to mop up the mess that beta squad has made. Some soldiers have been turned into zombies, which Murray explains will hatch new enemies if not dealt with quickly. Alongside Sid Meier’s character, the Reaper Squad includes a sniper with Arch Angel armor that allows them to hover above the battlefield and pick off Chrysalid one by one. An orchestrated attack that includes one team member with mind control capabilities, and another with cloaking that allows them to traverse the battlefield without being seen, allows the team superior tactical advantages.  Needless to say, they make quick work of even the most powerful enemies.

The XCOM: Enemy Unknown demo was fairly short, ended abruptly, and did little by way of explaining what the game’s key features were.   If you had no idea what XCOM was in the past, or Firaxis’ goals for this reboot, you likely left that demo shaking your head having a bunch of questions about the game, which the developers did not offer any Q/A for the group.  On the contrary, if you played the original XCOM, you can tell that this modernized version is staying true to the game’s roots.  It’ll be a must play for turn based strategy fans this fall when the game releases this October for the Xbox 360,  PlayStation 3, and PC.