The Rings of Power | Who is Morgoth? Connection to the Plot Explained

You've never seen a character quite like this in LOTR. The Lord of the Rings: The Rings of Power is finally out on Amazon Prime Video, and it feels like the passing from the Third Age into the Fourth just having waited this long. The series has laid out a Second Age Middle-earth, millennia before the events of The Lord of the Rings, but has alluded to great canonical conflicts to come, as well as past pyrrhic victories. At the center of one particular conflict is one mysterious enemy who has only been referred to in passing by those who have watched the movies, and is an incredibly compelling figure known as Morgoth. But Who is Morgoth in The Rings of Power? Read on to find out!

The Rings of Power | Who is Morgoth?

Morgoth, as he was known in Middle-earth, was originally named Melkor, as he was the most powerful of the Valar, and even all Ainur, the source of all evil in the universe (called Eä in the mythology.) He was created by Eru Ilúvatar, the supreme deity in Tolkien’s mythos, and is a character unlike any previously seen on the screen for the Lord of the Rings franchise. He was the primordial big bad of the First Age, who rebelled against his creator and fellow Ainur, stole the Silmarils, and waged war with the Elves in a conflict known as The War of the Jewels. It was during his initial rebellion that he was dubbed the name Morgoth, which, when translated from Sindarin Elvish, meant ‘Black Foe of the World.’

His appearance, which he as a Valar could choose, was described as the following, “…the light of the eyes of Melkor was like a flame that withers with heat and pierces with a deadly cold.”

Morgoth’s powers and abilities place him only behind Eru Ilúvatar for most powerful in the Tolkien lore, which essentially means the only person capable of beating him was God himself, let that sink in. He lacked the Secret Fire needed to outright perform acts of creation, but he was able to corrupt many things he encountered, allowing him to dominate Arda by his presence, breaking the will of Men, and even ruining immortality for Elves.

Morgoth was capable of summoning natural disasters, firestorms, and inflicting deadly curses on his foes, and the conflicts with him, the last of which is the War of Wrath but also destroyed the northwestern portion of Middle-earth known as Beleriand in the clash. He was able to command Balrogs (plural) in battle. His might was not to be trifled with, and one we can hardly fathom when evaluating against other LOTR villains on the screen.

Morgoth’s Connection to The Rings of Power Explained 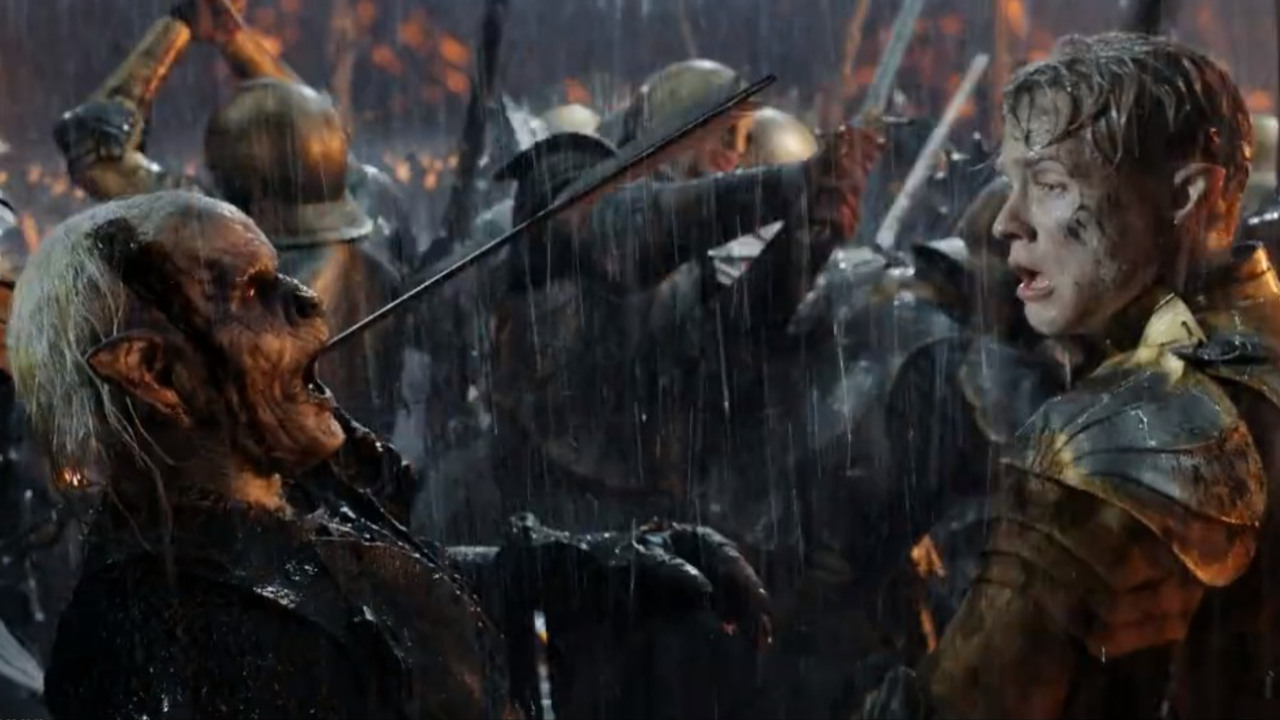 Morgoth has been banished to the Void after his defeat in the War of Wrath as told in the first episode of The Lord of the Rings: The Rings of Power. His presence is gone from Middle-earth, but destroyed and corrupted a great deal, which the characters are still dealing with. His hatred would manifest in the soil of Arda itself, a looming evil much like the symbolic power of The One Ring.

His most famous legacy, in terms of the plot as we know it, comes with his most powerful servant, the sorcerer Sauron, who would become the menace of the Second Age and the main villain of The Rings of Power. He would continue his master’s cruel legacy, even converting Men such as the Númenoreans to worship his master as a god, and would refer to him by his original name, Melkor. While his return was prophesied, in many ways his legacy made him live on far beyond his banishment through Sauron’s deeds. In terms of parallels, Melkor/Morgoth is Satan, or in fandom terms such as 40k, he is Horus, and Sauron is Abaddon.

This concludes our coverage of Morgoth in The Rings of Power! Be sure to check out our entertainment column for more stories like this!

Attack of the Fanboy / Entertainment / The Rings of Power | Who is Morgoth? Connection to the Plot Explained