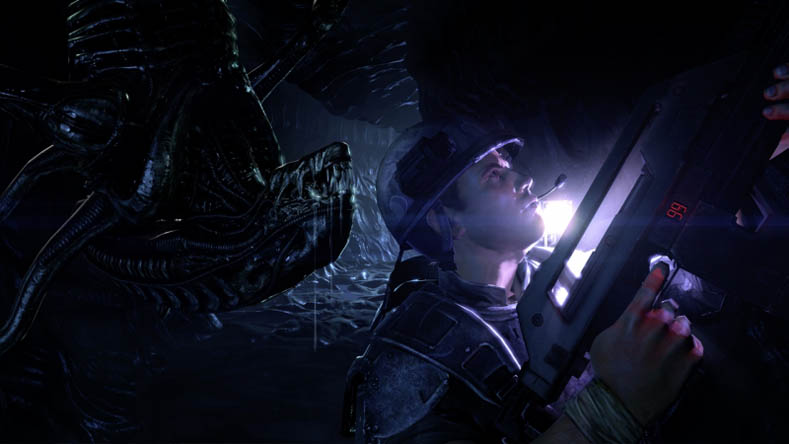 Aliens: Colonial Marines has apparently seen yet another delay.  Sega has confirmed that the first person shooter won’t be arriving this spring, as originally expected. Instead, the multiplatform title will arrive in Autumn 2012.  The Gearbox creation has been delayed numerous times over the development process, and Sega explains the most recent delay of the popular science fiction property.

“Aliens: Colonial Marines is a process of creativity and invention and those don’t necessarily follow the structure of an assembly line,” the publisher revealed.  “While setting clear goals, dealines and predictions is helpful, they are often subjective.”

“We don’t want to sacrifice the creative process just for the sake of following a blue print.  We prefer to have the creative discovery shape that blue print because our goal is to make a great game, and we are prioritizing this goal over the previously targeted date.”

Aliens: Colonial Marines has extremely high expectations from the fans.  The history of this game is a long and sorted one, numerous developers were slated to make a title by the same name, with each failing to launch.  Gearbox who signed on to make the title has pushed forward with the development process for the game of which little has been seen.   What has been shown are a handful of screenshots and a teaser for the game that have done little to make the wait for this title any less difficult.

“Aliens: Colonial Marines begins with an ostensibly abandoned ship, the U.S.S. Sulaco, recovered in orbit around LV-426. Players lead a group of highly trained United States Colonial Marines as they board the deserted craft to uncover the fate of the crew. They will have to fight to survive unspeakable horrors and their own anxieties as they chase down the truth behind a galaxy-spanning deception that places humanity at the mercy of the most murderous and deadly species in the universe. Aliens: Colonial Marines features authentic environments, such as the surface of LV-426 and Hadley’s Hope, weapons inspired by the film series and is designed to provide an exhilarating and engaging new chapter in the Aliens universe.” – Gearbox

Be on the lookout for more details surrounding Aliens: Colonial Marines as the game nears its new projected launch window of Autumn 2012.