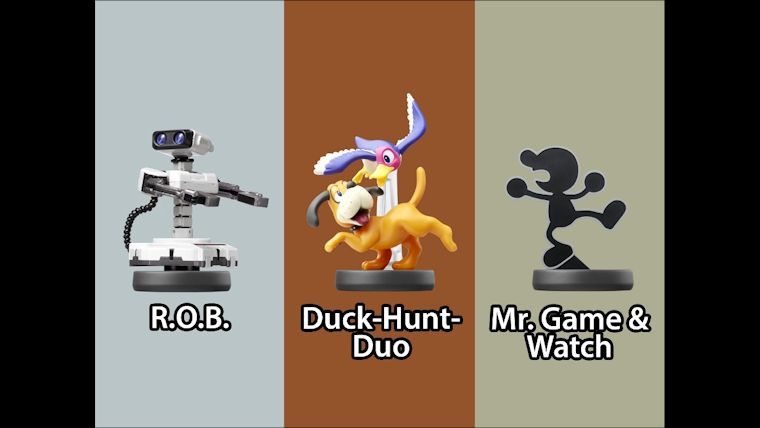 This past Friday brought the release of the Dark Pit amiibo as the US has now officially slowed out its Wave 5A. The future was still a major question mark, with only a vague September release date for a bunch of upcoming amiibo, but now it seems one retailer is getting a jump on the competition with a special pre-order event for what is reportedly an exclusive 3-pack of Super Smash Bros. amiibo.

First leaking on Reddit over the weekend from numerous verified sources from within the chain that informed directly to the subreddit mod, GameStop will be holding a special amiibo pre-order even this coming Saturday, August 8. While details are scarce right now, the one thing that is pretty certain from reports is that GameStop will be offering pre-orders for a special Retro 3-pack that will include Duck Hunt, ROB, and Game & Watch.

Early word was that these three were not definitely exclusive to GameStop, but with them being the only ones not to show up at all in the store listings for Target and Toys R Us while the others have, it seems to point at them possibly being exclusive. However, it could just be the 3-pack is exclusive and single versions of at least two of them come out later elsewhere also.

The better news is that instead of doing the terrible web in-store order system last time that required games to pay the full price at once, which went terribly for Wave 4, this one will be done in the classic Gamestop pre-order way in store.

Supposedly, each store will be getting a minimum of 30 pre-orders for this 3-pack, with some stores getting more. Gamers will only have to put down $5 for this and then it will be shipped to store on what is said to be the release date of September 11, alongside Mario Maker. This also would make you think that we may be able to pre-order the Mario Maker bundle or the 30th anniversary Mario amiibo, but that is not known at all yet.

The most widespread part of this that has circulated is that stores will be opening early for this event as well. There are conflicting reports on just how early though. Some say that all stores will be opening three hours early, with the first hour exclusive to Power Up Pro Rewards members, while others say stores will just open an hour early, with that first hour being exclusive to Power Up Pro Rewards members.

More details are said to be announced on Monday, so hopefully we will be getting some great news here. No details are known on whether or not there will be other pre-orders for the other amiibo coming in September. It appears that likely Bowser Jr. and Dr. Mario will be exclusives to Toys R Us and Target respectively based on early store listings, but Olimar, Zero Suit Samus, Ganondorf, and the Mii Fighters appear to be non-exclusives, so perhaps we could see those up for pre-order as well, though likely not at the quantities of the 3-pack.

Make sure to stay tuned for more details on Monday for this special amiibo event.