The latest news in the world of video games at Attack of the Fanboy
July 7th, 2015 by Damian Seeto 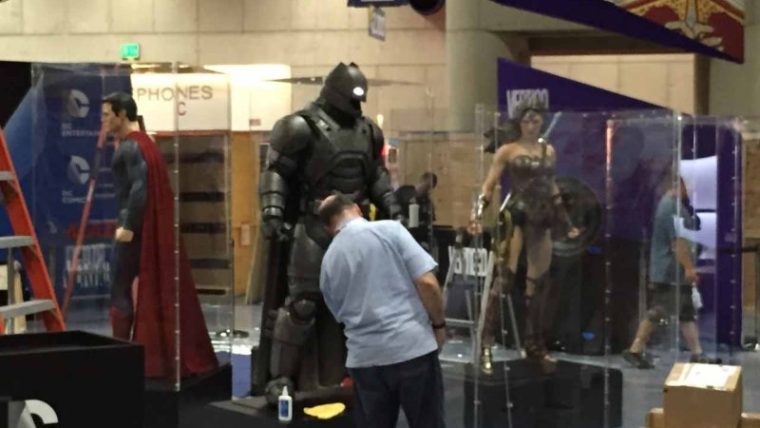 People who are going to Comic Con later this week will get a chance to see the armored Ben Affleck Batman suit from Batman v Superman: Dawn of Justice.

ComingSoon.net snapped some early photos from the Comic Con event. They managed to see the armored Ben Affleck Batman suit. It will be in full display for attendees to look at.

There will also be the Henry Cavill Superman suit as well as the Gal Gadot Wonder Woman outfit too. These we have seen before from previous photos released recently.

It’s likely the normal Ben Affleck Batman suit will be at Comic Con as well. We just cannot see it from the angle the photo has been taken from.

Bruce Wayne will be using the armored suit to fight off Superman in Batman v Superman: Dawn of Justice. The Batman vs Superman fight should be the best part of the entire movie.

Hopefully later this week, we will see clearer photos of the armored Ben Affleck Batman suit. We are sure to know more details from the actual Batman v Superman: Dawn of Justice movie itself. Warner Bros. is teasing huge announcements are incoming for future films too.