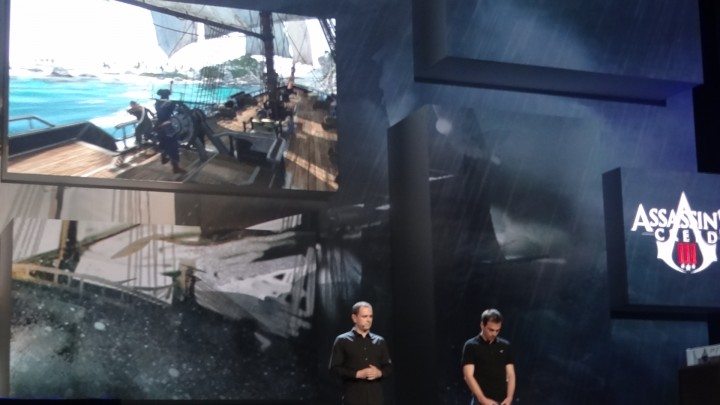 It’s no secret that Assassin’s Creed III has been at the top of everyone’s list coming into E3 2012, and rightly so. Ubisoft has showed off the game in style so far, giving us glimpses of an unbelievably fluid combat system, bloody battlefields of Revolutionary America, and an even Connor taking out his Redcoat/Templar target by way of a bayonet on a British musket. One thing we perhaps didn’t expect to see however, was the game’s massive and gorgeous naval sequences.

In addition to the unveiling of an Assassin’s Creed III PS3 Bundle and exclusive game content for the console, Ubisoft demoed an intense naval battle between British and Colonist forces. The demo began with the player taking the reigns of the ship, guiding it through a lush tropical environment. Suddenly, British ships ambush you as if you were steering the Black Pearl and saw Johnny Depp aboard.

Your crew reacts very realistically to the notion of being bombarded by cannons. They scramble to take their places and fire back at enemy ships. As cannonballs whiz by, an innovative targeting system appears as a clear, lined filed of sight. The line of sight shifts according to the direction in which you steer the ship, so your cannons must be aimed directly at the opposing ship to take it out. When you do, the result is a beautiful ship-sinking sequence of destruction.

The waves begin to pick up, and the ship genuinely responds to the them as they crash against the bow. A storm is brewing as you and your enemies trade cannon shots and you see your crew working next to smoldering pieces of blown-up wood. Amidst the rainfall and the frothy mist of the Ocean, you pull up next to an enemy ship and prepare to board. The demo ends before you can do so, but Ubisoft has given us more than enough to whet our appetites until the release of Assassin’s Creed III.

We’ll be bringing you coverage from the show floor, so stay tuned for more updates. Check out the Assassin’s Creed III E3 naval demo below: