Bastion Hands on Preview from E3 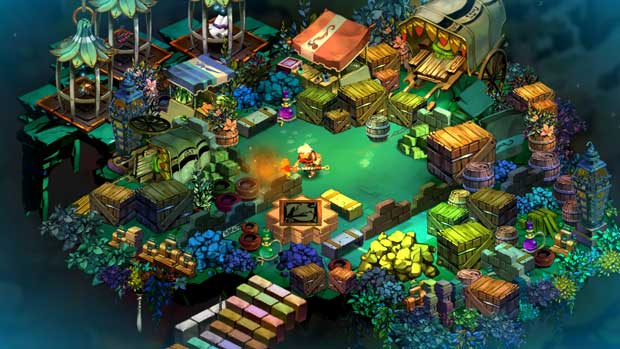 Bastion will hit the Xbox Live Arcade this summer.  The game which debuted at PAX Prime in 2010, is an independent developed title from Supergiant Games.  Bastion is an Action RPG in the spirit of Diablo, or at least that was my take on the game when I spent some time with the title at E3 2011.

In Bastion, you control Kid.  Kid has been forced into a crumbled version of the world after the great Calamity.  Kid’s job is to build a safe haven, picking up the pieces of this broken world that surround him.  One of the things that strikes you immediately with Bastion, is the beautiful and detailed game world.  It’s a colorful and vibrant place, with excellent art throughout.  The environments are lush, the artwork is imaginative, and the presentation is exceptional.  An innovative narrative system responds to players actions in real time, and it makes the game different than anything you’ve ever played.

While the concept of an Action RPG isn’t new, Bastion does take the genre in a new direction of sorts.  The completely differnt enviroments that you’ll find throughout the gameworld, a wide variety of weapons and upgrades to uncover, and a storyline which drags you into the story behind the game.  The short demo of Bastion at E3 was so well done, that it almost made me miss one of my appointments with a major developer, I had become so entertained with the game.

Bastion, will be available later this year, during the Summer of Arcade series on Xbox Live Arcade, is one of the titles that is sure to draw some attention.  Be on the lookout for Bastion this summer.