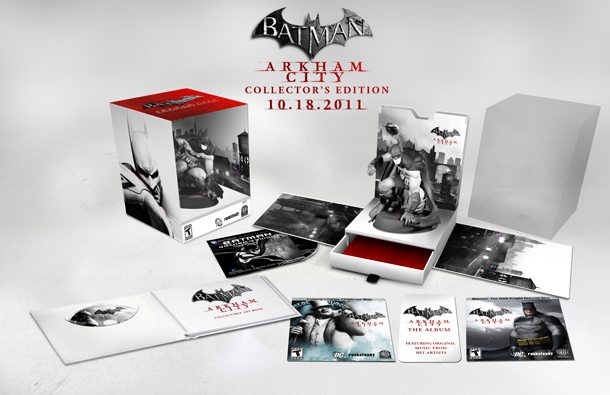 As reported previously, gamers itching for more than just an open-world Batman game will happy to know that the Batman: Arkham City Collector’s Edition has been confirmed by Warner Bros. They’ll be even more elated when they realize that early reports didn’t detail all of the edition’s features. Below is the list of what you’ll be getting when you spend that extra $40 (retailing at $99.99):

Arkham City, the new maximum security “home” for all of Gotham City’s thugs, gangsters and insane criminal masterminds, will reportedly be five times larger than the game world in Batman: Arkham Asylum. Set inside the heavily fortified walls of a vast district in the heart of Gotham City, this game looks to be the definitive experience in the Dark Knight’s saga (Speaking of which, was anyone else a tad disappointed by The Dark Knight Rises trailer?). Batman: Arkham City will drop here in North America on October 18th.