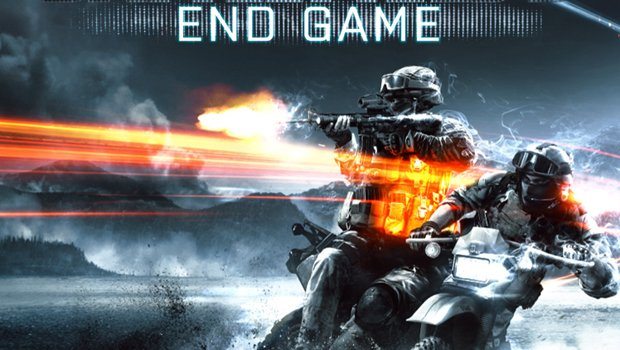 Forget the dinosaurs that DICE has been teasing with Easter Eggs in Battlefield 3, End Game will be about “Lethal High Speed Action” according to the developer.  At EA’s summer showcase, DICE talked briefly about the End Game content that is still pretty much under wraps.

The first End Game imagery shows off motorcycles as a new vehicle type, with presumably a two man crew: one guy drives while the other sprays gunfire.  Not due until March 2013, End Game will be the last of DICE’s expansions for Battlefield 3.  It is slated to contain new maps, obviously vehicles, but the rest of the contents aren’t being talked about at this point.

Prior to its release however, fans will get their hands on Armored Kill.  Armored Kill which has been recently revealed as a tank-centric expansion which will focus on the heaviest of heavy tanks in all-out vehicle warfare.  Following Armored Kill, fans will get Aftermath.  Aftermath will be set in an earthquake ravaged locale, that has soldiers scrambling to use make shift weapons in their fight.

Battlefield 3 End Game, Armored Kill, and Aftermath are all part of the Battlefield 3 Premium content pack which is available now on Origin, Xbox Live, and PSN.