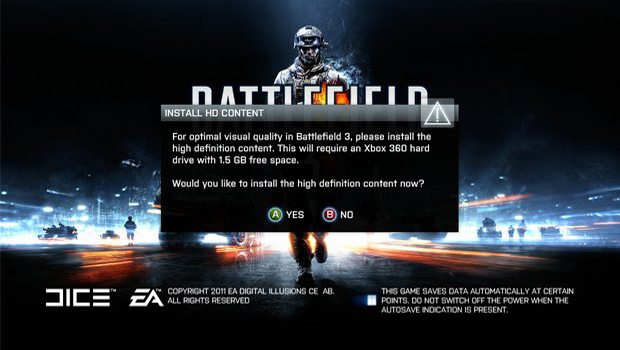 Included in the Xbox 360 version of Battlefield 3 is an “optional” texture pack on disc that enhances the experience immensely. While DICE themselves recommend the install for optimal quality, some Xbox 360 owners are having problems installing the content on their consoles. The issue is seeming to hit only players that own an Xbox 360 Slim 4GB Edition (Why you should own a console with more than four gigs of storage is another story entirely). Nevertheless, if you play on Xbox Live, and you only have the minimum space version, it looks like you are out of luck on the “optional” install.

The 4G Xbox 360 Slim will give you an error message when trying to install the pack, telling you that “The game only permits installing HD content on the Xbox 360 Hard Drive”. While you may be scratching your head wondering why your 4GB isn’t enough, it doesn’t have as much to do with space as it does with the type of memory that it is.

Since the 4GB version includes onboard memory, DICE may need to issue a workaround for these players.