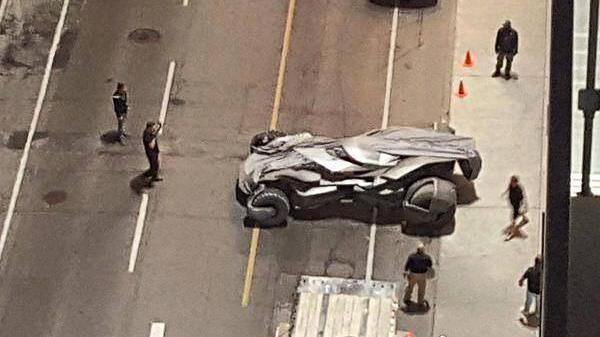 It appears the Ben Affleck Batman will appear in Suicide Squad. His batmobile has been seen on the set of the movie.

Heroic Hollywood posted the a photo on Facebook of the Ben Affleck batmobile on the Suicide Squad movie. The movie is currently filming in Toronto, Canada at the moment.

A few weeks ago, people spotted Ben Affleck himself on the set of Suicide Squad. People were unsure if Batman would actually appear as it looked like Bruce Wayne was only going to have a cameo. This new photo highly suggests that Batman himself will appear in the movie.

It’s still unknown at this stage when Suicide Squad takes place in the DC Cinematic Universe timeline. Some people have speculated it takes place before Batman v Superman: Dawn of Justice.

Anyway with the batmobile in Suicide Squad, this means Ben Affleck’s Batman might appear to confront the Jared Leto Joker. Obviously the two characters are enemies and a showdown might happen between them.

Not a lot of details has been posted about the stories of both Batman v Superman: Dawn of Justice and Suicide Squad at this point. We do know Ben Affleck plays an older and more wiser Batman. It’s a contrast to the more inexperienced Superman played by Henry Cavill.