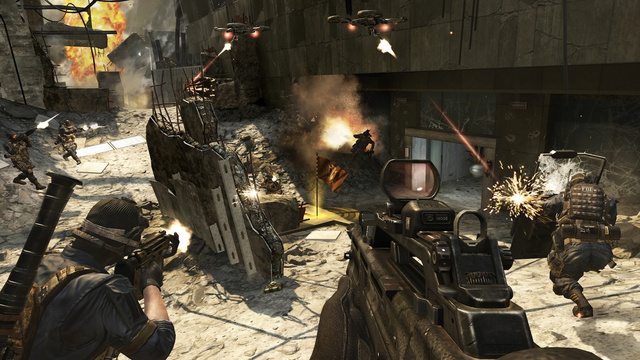 Over the weekend, and allegedly legitimate leak of the Call of Duty: Black Ops 2 internal beta leaked to the web. This internal beta included details on the single player and multiplayer facets of the upcoming shooter, detailing maps and brief descriptions of the game.

Posted on a hacking forum called se7ensins and then transcribed by iplaycod, depending on how much the game changes between the date this beta build was released and November, these should give you an idea of what to expect from Black Ops 2 multiplayer.

“Chinese Supercarrier. Open engagements on the deck, with great close quarter fights through the hull.”

“Port of Singapore. Good for close quarters engagements and verticality.”

“Hidden drone facility in the heart of the Mynamar jungles. Great long engagements down the center, fun close quarter fights through the facility.”

“Set in a ruined downtown Los Angeles after an invasion”

“Pakistan nuclear power plant. Battle for control of the nuclear cooling tower and the surrounding facilities.”

“Floating resort in the middle of the Indian Ocean. Tight corners and angles throughout.”

“Fight through this hillside mansion, in the Hollywood Hills. Hectic close quarters engagements.”

“Run down section of Panama. Great close quarters engagements and tough chokes to fight over.”

“Wind farm in the steep hills of Yemen. Fight across the different tiers and angles.”

“Border town between China and Kyrgyzstan. Classic engagements and destinations to fight over.”