The latest news in the world of video games at Attack of the Fanboy
Updated July 30th, 2021, by Jelani James 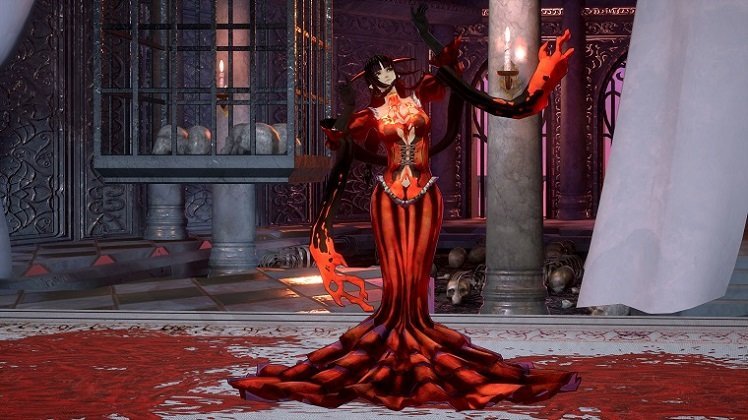 505 Games has revealed a new trailer for Koji Igarashi’s Bloodstained: Ritual of the Night ahead of E3 2017 next week. This time around, footage shows off something that hasn’t been seen in any trailers or gameplay demos — a boss.

The boss in this trailer is named Bloodless who can control blood with her mind. In an interview, Igarashi reveals that her dress is actually made out of blood and it actually falls apart when she receives damage. While this may seem like a good thing for the mildly perverted, this also makes Bloodless far more dangerous as that blood will spill onto the ceiling and floor for her to use at will. Blood on the floor can be absorbed by the boss for some unclear benefit, while she can also cause blood to rain down from the ceiling to damage the player. You can protect yourself from the rain by hiding beneath umbrellas floating around the room, but Bloodless can also use those very umbrellas as projectiles to harm you. On top of that, there are the attacks that she can use herself, such as shooting a massive stream of blood from the umbrella she’s holding. All in all, it looks like the battle will be one of those that get more difficult the longer it lasts.

In addition to the boss fight, we also get to see the Church map, as well as Miriam’s Spear Throw, Resist Holy and Optmizer skills, and her whip, rapier and katana weapons.

Bloodstained: Ritual of the Night will have an alpha available for Kickstarter backers at some point in August, according to Igarashi. Meanwhile, the final version of the game is expected to arrive for the PlayStation 4, PlayStation Vita, Nintendo Switch and Xbox One, as well as the Linux, Windows and Mac in the first half of 2018.

Bloodstained: Ritual Of The Night E3