Call of Duty: Black Ops II Premieres on Xbox at E3. You’ve seen it all before. 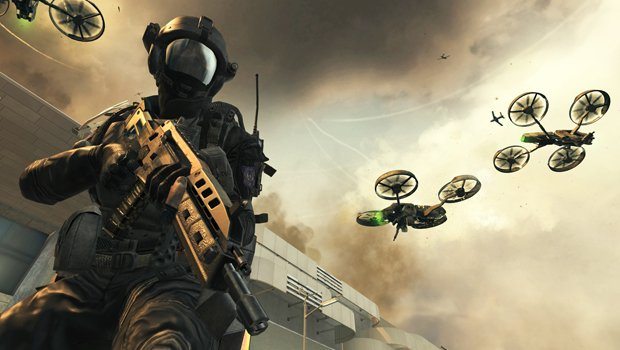 The moment Call of Duty fans have been waiting for is upon them. Gameplay footage of Black Ops II is now readily available for the world to see, and while we won’t say it was a disappointment, some fans may be wondering what Treyarch has changed, if anything, from its predecessor.

The demo began with the player in an armored car as the game’s protagonist is amidst Secret Service agents protecting the President. What follows is the same sequence you’ve seen countless times in CoD games: set-pieces are triggered, ending with a shellshocked crawl towards a companion who is screaming at them to move on.

Nevertheless, you’re thrown into battle on a Los Angeles highway. You then take the reigns of a tank anti-aircraft gun and begin taking down enemy planes. Soon after, you take a position as a sniper and provide your men with covering fire.

The demo jumped to L.A.’s downtown plaza in which the gunfight continues. If you’ve played Modern Warfare 3, you’ll recognize the “building collapsing” sequences as familiar territory. After you get into a jet, you rain fire upon your enemies on the streets of downtown L.A., where the demo ends shorty after showing you the utter chaos that you may or may not have seen before in a prior CoD installment.

We’re hoping Activision will show us something we haven’t seen before when our E3 coverage heats up throughout the week.

Home / E3 / Call of Duty: Black Ops II Premieres on Xbox at E3. You’ve seen it all before.