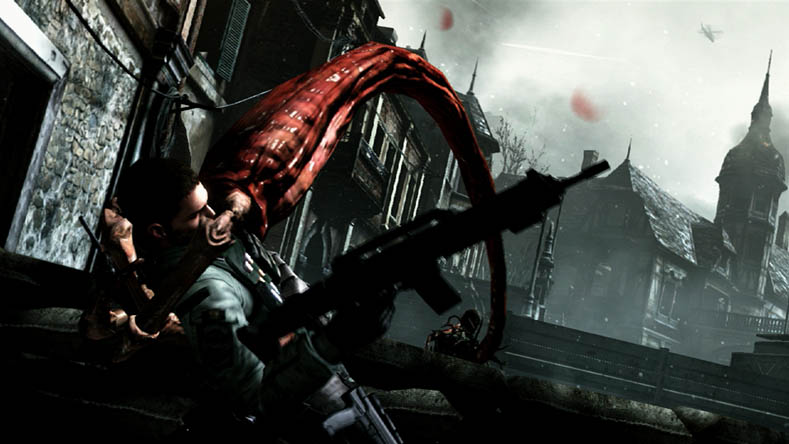 Capcom has just announced a slew of new details about their upcoming Resident Evil 6 title. Following last month’s reveal, Capcom has new intel concerning the setting, characters, and some backstory behind the sequel.

While Capcom already revealed that Chris Redfield would returning to headline Resident Evil 6, and would head to China, they’ve revealed that the main location of the game is in a “fictitious costal town called Lanshiang”. The game is also set in the very near future, 2013. Capcom has also dished on a handful of the characters that will be featured in the upcoming game.

Leon S. Kennedy: Following the Raccoon City incident Leon was recruited as a US government agent by none other than Adam Benford, who would later become the President of the United States. Ever since the nightmare that was Raccoon City Leon has made it his life’s work to eradicate bioterrorism.

Helena Harper: Like Leon, she is also a government agent, but was in the process of transferring to the Secret Service to become one of the President’s personal bodyguards. In the announcement trailer it is Helena who admits to Leon that she is the one responsible for this incident.

Chris Redfield: The ex-S.T.A.R.S member who continued the fight against bioterrorism as the leader of the BSAA underwent a personal trauma some six months prior to the events depicted in RE6. In spite of this he has rejoined his BSAA colleagues in China to uncover a major bioterrorist attack.

Ingrid Hunningham: : A member of Field Operations Support (FOS), Ingrid has been working with Leon for a long time, and they share a mutual trust.

Adam Benford: President of the United States and the man who hired Leon after the Raccoon City incident.

A Mysterious Third Protagonist: We’re still trying to track down his real identity but we do know this man is a mercenary currently engaged in a bloody conflict in Eastern Europe where reports confirm that B.O.W.s are increasingly being used. One day, he’s told that he is the man to save the world. Whilst he doesn’t understand the implications of this, he does immediately think how much
money he can make from it.

Capcom also outlined notable differences in the enemies in Resident Evil 6.  Zombies of course are back, but now Capcom says they can run, jump, and even use weapons that are much different from previous Resident Evil games.  One new enemy that was highlighted in the info dump was the J’avo.  Named by the BSAA after the Serbian word for ‘demon’, the first J’avo made an appearance in the conflict zone of Eastern Europe about six months before the action of Resident Evil 6. The J’avo still exhibit certain human elements – such as the ability to understand speech, work together as a group and use weapons – but they are also incredibly aggressive and a number of their actions have regressed to pure instinct.

In fighting off these new enemies, players will also be treated to a new “Redesigned control system”.  The highlight?  You guessed it, Resident Evil 6 will allow players to shoot while moving, slide, roll, and take cover during battle.