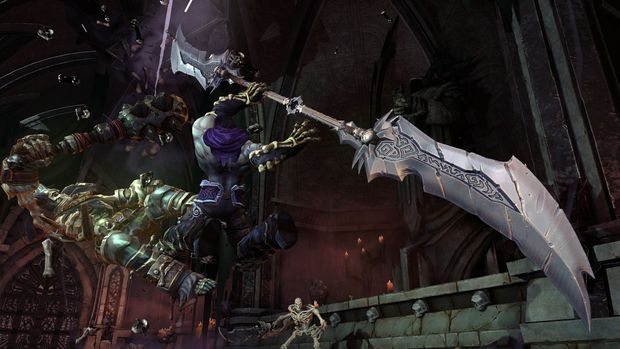 Like its predecessor, Darksiders II won’t have multiplayer included in the game when it releases next year.  According to a recent interview with Vigil Games, the developer is interested in it as a possibility but have been unable to incorporate an online mode into the game due to numerous animation issues with the game. Marvin Donald recently explained to IGN the reasonings behind no multiplayer in Darksiders II.

“Multiplayer has been something we’ve been wanting to do since DS1. You almost have to make four games. You’ve got completely different animation sets. It’s 800 to 1000 animations for Death alone and they’re all unique. One thing great about working with Joe is that he comes up with awesome characters but they have completely different proportions, so you can’t share any of the animations across them.”

As cool as it sounds to go traipsing around the world with the four horsemen of the apocalypse in a cooperative mode, there’s no indication at this point whether Vigil will include this future Darksiders releases.  For now though, and their next game, Darksiders II, there won’t be any multiplayer.