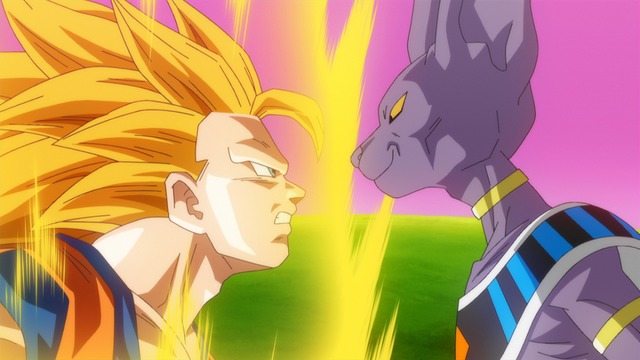 The titles for Dragon Ball Super episodes 6, 7 and 8 have now been revealed.

Facebook user, Gojiitaaf, has unveiled the future episode titles from a Japanese publication. Unlike in July, there will be no breaks. August will have a new episode each week.

Episode 6 is airing this Sunday and will be called “Don’t Anger the God of Destruction! The Heart Pounding Birthday Party“. As you may have seen from the preview last week, this episode focuses on Vegeta trying to prevent Beerus from getting angry.

Episode 7 airs on August 23rd, 2015 and is called “How Dare You Hit My Bulma! Vegeta’s Furious Mutation?!“. This is when Beerus puts his hands on Bulma and Vegeta gets angry and starts attacking him.

Episode 8 of Dragon Ball Super is airing on August 30th, 2015 and its title is “Goku Steps Up! The Last Chance From Beerus?“. Goku finally arrives to Bulma’s party to face Beerus after getting his butt beat by him in episode 5.

This is the schedule of episodes for the rest of August. Keep it locked at AttackoftheFanboy as we review every episode each and every week. Hopefully the series gets some new characters and stories once the Battle of Gods material finishes.