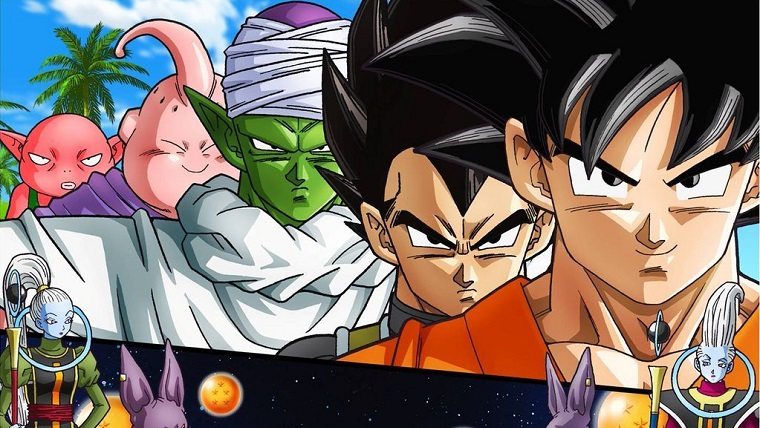 The manga for Dragon Ball Super has revealed a lot of spoilers for the upcoming episodes for the TV show. The spoilers include some results of some upcoming fights in the multiverse tournament.

V-Jump magazine is up to Chapter 9 of the Dragon Ball Super manga and it centers around the fights between Goku and Botamo plus Goku vs Frost. Facebook user, Gojitaaf, translated the script to English and the details are very interesting. It goes without saying there are big spoilers revealed, so avoid it if you want to watch it unfold on TV instead.

If you don’t know who Botamo is, he’s a huge orange bear-like creature with a slippery style of body. Goku’s attacks seem to be ineffective even when he uses the Kamehameha. Everyone is looking on as Champa is laughing while Piccolo and Vegeta look concerned.

Krillin suggests Goku should go Super Saiyan as he’s been fighting only in his base form so far. Vegeta doesn’t feel transforming will help because he thinks Botamo’s body will still absorb all of Goku’s attacks. It is only the first round of the tournament and Goku wants to save this energy for other fights.

Goku wins by not fighting Botamo, but he instead grabs him by his legs and then drops him out of bounds. It is a humorous scene as it seems like a simple tactic. Botamo loses and then Goku has to immediately fight Frost who is the same species as Frieza.

However, Frost is not as evil as Frieza was. Frost is actually a nice person, but his skills in combat should not be underestimated. Much like Frieza, Frost has transformations but he only fights in his first form at the beginning.

The text says that both guys throw punches violently with Frost even hitting Goku in the stomach which draws some blood. They are also fighting and moving so fast that the likes of Krillin and Roshi cannot see anything. Whis and Beerus are looking on and they’re not impressed so far as Goku and Frost are not fighting in full power.

Goku realizes this too and wants Frost to transform. Frost changes into the third form which is the ugly one with the weird cone head. Piccolo remembers how powerful this form was as he got beat by Frieza in this transformation.

Goku never saw this form so this is new to him. As they fight, Goku then decides to show his true form which is Super Saiyan Blue. Frost then changes into his real final form and then the chapter ends.

If you managed to read all of that, what do you think of Dragon Ball Super so far? We will see this in TV show form in the upcoming weeks. Check out our weekly Dragon Ball Super reviews every Sunday for more coverage.