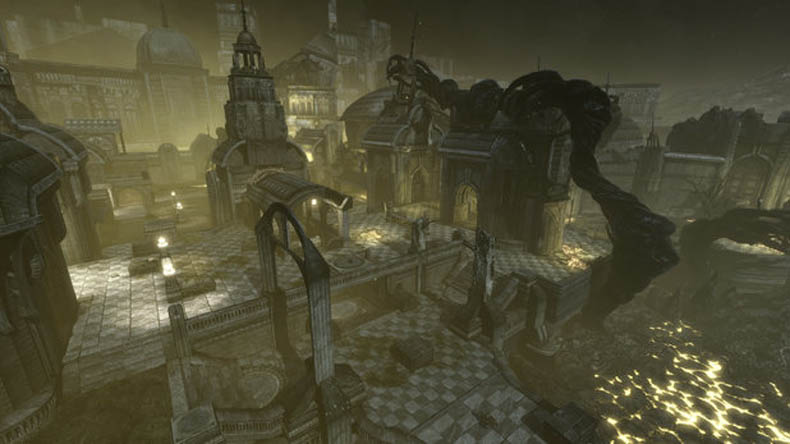 Epic Games has just announced the Forces of Nature DLC pack for Gears of War 3 will arrive on March 27th. The new map pack will contain five maps, with three of the maps displaying a natural disaster of some sort. The other two maps will be re-makes from the Gears of War 1&2.

Here’s the full breakdown on what to expect from the Gears of War 3 “Forces of Nature” DLC.

Aftermath – A government park after a tsunami. There is seaweed and wreckage everywhere, and the main play space sits under a huge cargo ship which was deposited on top of a building during the storm. The area floods and quakes during gameplay, as the whole thing is teetering on the edge of falling into the water below. This has gameplay implications as it is difficult to aim during the quakes, and difficult to be stealthy while splashing through the water.

Artillery – Starts out looking like an ordinary military base, but during gameplay a storm kicks up. Lightning begins to flash on the horizon and eventually a tornado develops and sweeps near the play space. Dust and debris are kicked up making it difficult to see, and the buffeting winds can mask your approach.

Cove – A is a small port that the Stranded have taken over and turned into a little village. The map is very open with long lines of sight, but there is a really, really heavy layer of fog that masks just about everything. There’s a really nice sniper nest inside a central ship, but the sniper’s form is silhouetted by the low angle light shining through the fog.

Jacinto – It was a beautiful city, but huge stalks have popped up through the buildings and flooded the entire area with Imulsion. Half of the map is dead and crumbling, with Imulsion fumes hanging in the air. To make matters worse, the drizzle that is present when a match begins quickly develops into a heavy rain storm that impedes visibility and lines of sight as water starts sheeting off the buildings.

Raven Down – A very small crossroads that is blanketed in a blinding snow storm. A Raven helicopter has crashed in the storm, and crashed through an elevated train on its way down, so there’s train wreckage to deal with as well. The snowstorm ebbs occasionally, but is more often so heavy that it’s difficult to see more than a few meters ahead at any given time.
Fergusson also revealed that the DLC will include four weapons hidden in the maps called “Elemental Cleavers”.