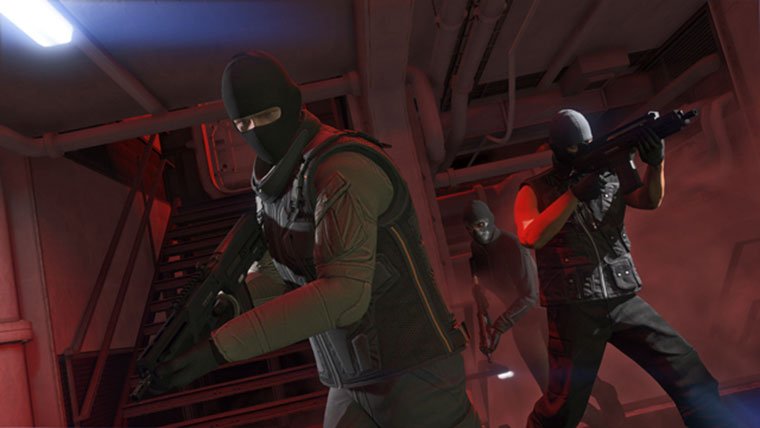 GTA V Online Heists have finally arrived.  Users on Xbox and PlayStation platforms (Xbox One and PS4 | last-gen still waiting for update) are reporting that the update is available and begins automatically for owners of the game.  The most anticipated feature for Grand Theft Auto V players since the mode was teased shortly after the original release of the game in 2013.

After months and months of waiting, false alarms, and downright false rumors, we’ll finally get to see if GTA V Online Heists turn out to be worth the wait.

Online Heists in GTA V allow players to team-up and pull off elaborate robberies in Los Santos.  Heists are planned similarly to how they were in the single player mode in GTA V. Heist Leaders coordinate the crime to be, provide the set-up costs for the job, and designate roles for each crew member and their corresponding cut of the loot.  The update launches with five heists and a host of challenges to tackle.  With one such challenge being to complete all the GTA V Online Heists in order, without losing a crew member, on the hard difficulty mode, to earn an obscene $10m payoff.

Playing GTA Online Heists also allow you to rack up more gamerscore and trophies, which were outed earlier today.

Online Heists aren’t the only thing Rockstar has players waiting for.  The PC gaming community has been patiently waiting for the oft-delayed PC version of GTA V.  Rockstar recently announced that Grand Theft Auto V would see one final delay to March 24th