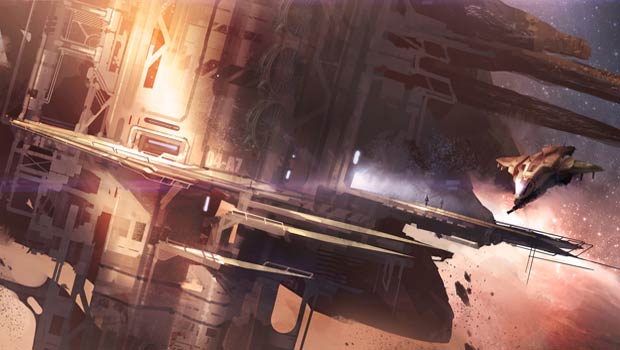 343 Industries has begun its slow reveal of Halo 4.  Today, the developer has unveiled one of the new multiplayer maps from the upcoming shooter; “Warhouse”.  The appropriately named industrial mining ship features a “dramatic vista”, having you peering off into deep space.

“We wanted this playspace to be similar competition-wise to older symmetrical maps in previous Halos, so we sought influence from those, and also from the industrial close-quarters combat in more recent games. There are many paths from the center room, allowing you to surprise opponents from unexpected directions and separate them from their comrades. There are also numerous over-and-under pathways that can be used to sneak up behind opponents who are holding their ground. Since this map is symmetrical, one team doesn’t have an advantage over the other based on where they spawn or what part of the map they control. ”

Halo 4 is due out exclusively on the Xbox 360 later this year, for the complete rundown on Warhouse, head on over to the Halo Bulletin on Waypoint.