The latest news in the world of video games at Attack of the Fanboy
November 2nd, 2017 by Jose Belmonte 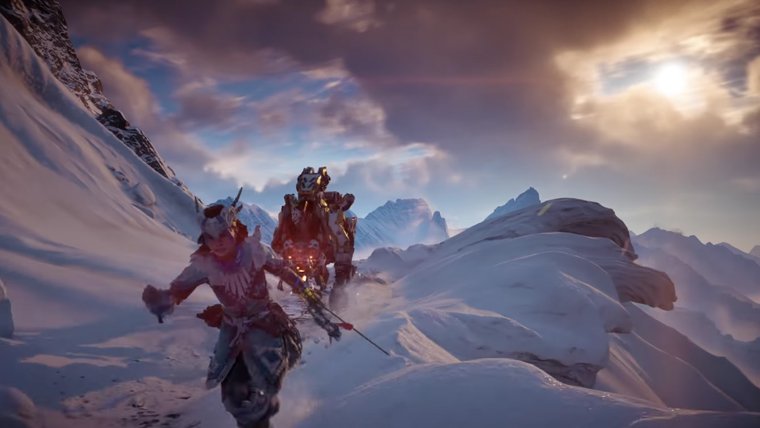 Building up to the release of The Frozen Wilds DLC for Horizon Zero Dawn, Guerrilla Games has shared a new videos featuring new footage and interviews with the creators explaining some of the details of the expansion. The first one focuses on a new menacing creature called the Scorcher, whose most dangerous attacks come wrapped in flames, while the second one offers a glimpse at the new area in which the new chapter is set, and the Banuk tribe.

The Scorcher will make our trip through the new northern region much more difficult, as its fast moves and fire based attacks will require players to use all their skills into finding the right moment to stun them and then perform their most powerful attack. The creature was designed taking the hunt techniques of predators like wolves or cheetahs, and even bigger animals like horses. In action, the Scorcher definitely seems like one of the most dangerous beasts of the game.

The new region that The Frozen Wilds unlocks is part of the Banuk territory. It’s an icy, hostile land in which the Banuk have only set small outposts, so don’t expect to see big populations. Despite of that, the DLC fleshes out much more details on the Banuk culture making use of the extensive lore that was written by Guerrilla, but never used on the main adventure.