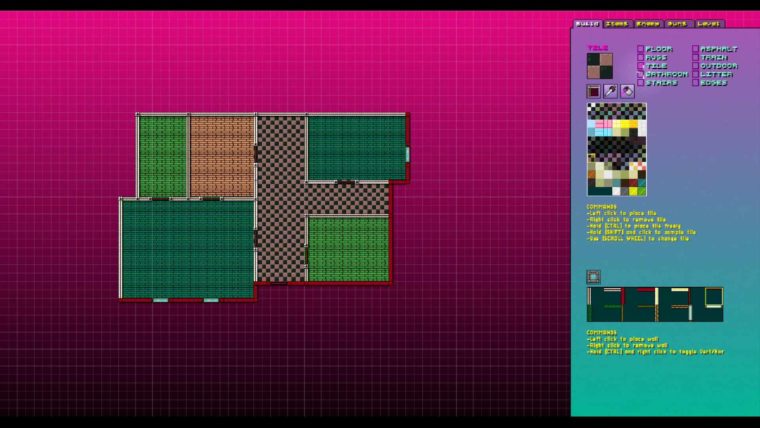 Dennaton Games is allowing all of our inner psychopaths to roam freely in Hotline Miami 2: Wrong Number’s recently revealed level editor. We were given the opportunity to sit down with Dennis Wedin and see just how our sadistic creativity could be unleashed. And, boy, did we like what we saw. Hotline Miami 2’s level editor has all of the simplicity of Microsoft Paint while remaining deep enough to allow anyone’s dream shootout to come to life. The creation process is broken down into five basic steps: Build, Items, Enemy, Guns and Level.

Build offers up the basic building blocks for levels, which consists of floors (and their material) and walls. After crafting the perfect layout, you move on to the Items, the option that grants access to all of the small touches that add personality to areas. Around 500 pieces of furniture, fixtures and other random items will be readily available to give the level the exact look and feel each player hopes to achieve. Next up we have the Enemy tab. Here we saw options for different guard types, such as ones with shotguns and others with uzis, or dogs. The option to make them static or patrol is also available. Unless you plan on taking on your carefully placed opposition with your fists (which is a viable option), you’ll want to strategically set down some weapons in the Guns tab. And, finally, the Level tab allows players to pick their starting point and even select which song will accompany the slaughter.

The entire feature is extremely friendly to newcomers, while sporting enough depth to give serious level creators the tools necessary to create a multi-level murderfest. I have no doubt that the PC and PlayStation communities will run with this feature and come up with some truly outstanding levels, ones the creators themselves would be proud of. And that’s good because this is Dennaton Games’ last Hotline Miami game. As Wedin stated during our time with him at E3, he hopes to give players enough options to create their own Hotline Miami 3. That way the series lives on through the community and their creativity. We’ll see what the fans do with this freedom when the game launches later this year.