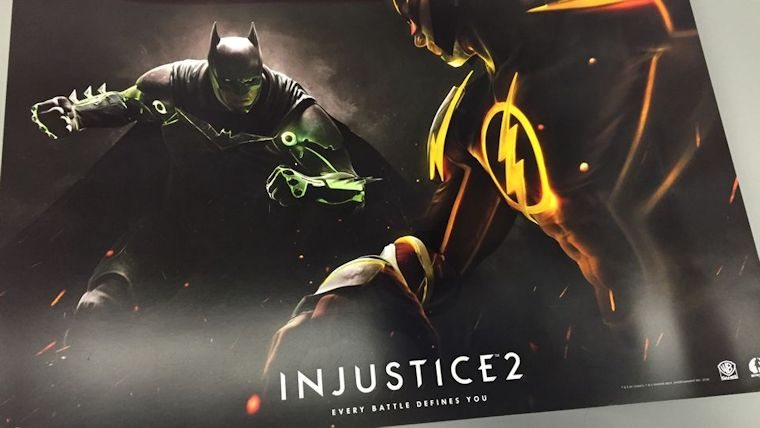 E3 is almost here and with that means we will be getting the reveal of many different games soon, with many starting to leak out early. One of those that has been rumored for the last week is a sequel to Injustice: Gods Among Us, which is now all but confirmed with a poster leak for the game.

Rumors first popped up last week for an Injustice 2, which stated it would be coming to Xbox One, PlayStation 4, and PC in early 2017 with an announcement coming at E3. Ed Boon then interestingly changed his Twitter profile picture to a “II” that seemed like it was hinting at the game.

Now, an actual poster has been leaked that appears to be real from everything we can tell. The poster just says Injustice 2 with the tagline “Every Battle Defines You.” Above this title we see Batman and The Flash about to face off for some unknown reason.

Different sources sent this poster to the likes of sites such as Kotaku and Game Informer, with Kotaku saying they confirmed the legitimacy of the poster with a separate source in retail.

This wasn’t all, as Boon seemed to all but confirm this was legitimate with a rather funny image he posted on his Twitter account. In this image he had a “Party Invitation List” with people like President Obama, Beyonce, Taylor Swift, and GameStop, but GameStop is now crossed out with a red marker, along with the actual tweet “¯\_(ツ)_/¯ ” This was also followed by him posting an image of Injustice 2 trending on Twitter with him asking “Anyone know how to de-trend something on twitter?”

Considering this poster is supposedly going to be a pre-order bonus for those that pre-order Injustice 2, it would make sense that the leak came from GameStop, especially after seeing Boon’s tweet. The question now is whether they will announce Injustice 2 prior to E3 or if they will wait and do so in one of the conferences.