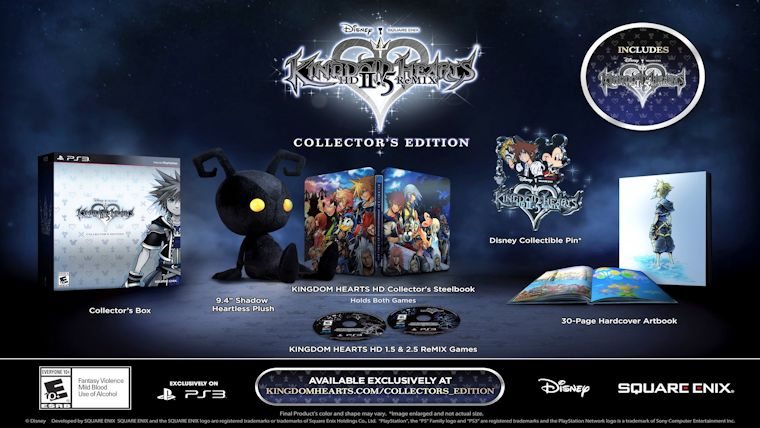 Kingdom Hearts HD 2.5 ReMIX is less than a month away from release in the US, so fans of the series are really looking forward to getting to play Kingdom Hearts II and Kingdom Hearts: Birth By Sleep in HD for the first time.

When the game released in Japan, a special collector’s edition was offered, but when a Limited Edition was announced in the US that only came with a collector’s pin, it paled greatly in comparison. However, Square Enix has surprised us all with a much better Kingdom Hearts HD 2.5 ReMIX Collector’s Edition in the US that may be even better than the Japanese offering.

This new Collector’s Edition is similar in ways to the Japanese, by offering both Kingdom Hearts 1.5 HD ReMIX and 2.5 HD ReMIX in one package, but comes with so much more, including:

This Kingdom Hearts HD 2.5 ReMIX Collector’s Edition that will retail for $99.99 will be exclusive to the Square Enix Online Store at this time, so if you are interested, make sure to get your pre-order in now, as there is no telling how limited of supply they will have. There is still the Limited Edition that will be available for pre-orders at the regular price of $39.99 for those interested as well.