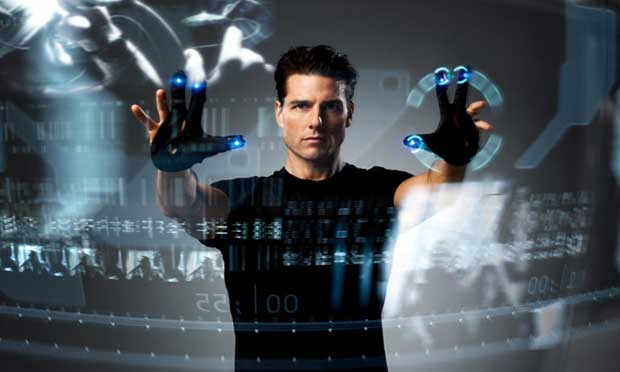 It appears that Microsoft is investing time and resources into implementing the motion-sensor technology powering the Kinect into laptops and other portable devices. What does that mean? Well, you can either research how developers will actually plan on incorporating such tech to said mechanisms and sift through page after page of technical jargon, or you can re-watch Minority Report and realize we’re one step closer to the construction of that awesome hands-free interface Tom Cruise utilized. Come on, we know you’ve wanted to use it at one point or another, and who doesn’t love them some pre-Scientology era Cruise?

Microsoft’s announcement to further the development of Kinect technology comes just weeks after the company revealed at CES that it would be introducing a desktop version of Kinect. According to the report from The Daily, who were able to go hands-on with the Kinect laptop prototypes, the devices demoed were Asus notebooks running new Windows 8 software (which will be publicly previewed next week). They described what they saw as “an array of small sensors stretching over the top of the screen where the webcam would normally be. At the bottom of the display is a set of what appear to be LEDs.”

Aside from the possibility of motion-controlled games being developed for mobile devices, Microsoft representatives speaking with The Daily indicated that “Kinect-enabled laptops could also toggle between programs with the wave of a hand, or media controls could be tweaked with the wag of a finger.” Think of the possibilities that such functionality could provide to applications across countless industries. I can already envision medical and educational purposes being heavily considered, particularly for this type of technology inside of a classroom in order to make a teacher’s job even more streamlined.

As The Daily points out, Microsoft will most likely license Kinect technology to third-party hardware manufacturers for their own unique uses and implementations like they currently do with Windows. From there, developers will have a chance to integrate the tech into various mobile devices and platforms. The possibilities are potentially endless.

I think it goes without saying that “futuristic technology” is a modern reality being developed and built upon with each passing day. Perhaps not the “stopping crime before it happens” part, but kick-ass interfaces…hey, you never know.