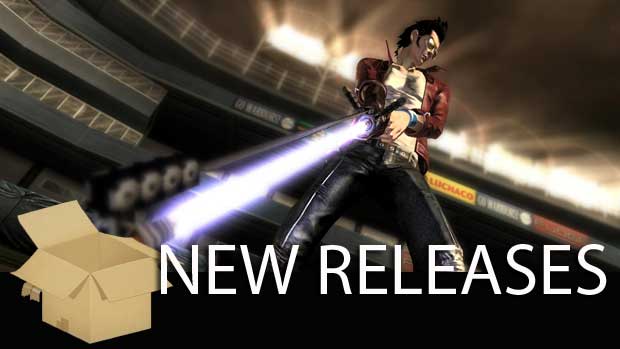 The latest video game releases for the week of August 15th, 2011

El Shaddai: The Ascension of the Metatron ( PS3, Xbox 360) – El Shaddai: Ascension of the Metatron is a third-person, single player action-adventure game in which players must subdue rogue angels, loose on the Earth in order to uphold God’s divine plan and prevent the destruction of humanity. Loosely based on the apocryphal Judaic works concerning the pre-flood biblical patriarch Enoch and his role in some traditions as Metatron — the angelic intermediary between God and his people — El Shaddai: Ascension of the Metatron features a compelling storyline; a distinct visual experience; combat, platforming and exploration gameplay; unique weapons and feedback systems; and controls that are designed to suit all levels of players.

Bastion (PC) – Bastion is an action role-playing experience that redefines storytelling in games, with a reactive narrator who marks your every move. Explore more than 40 lush hand-painted environments as you discover the secrets of the Calamity, a surreal catastrophe that shattered the world to pieces.

From Dust (PC) – From Dust is the latest original game concept by Eric Chahi, creator of the cult classic, “Another World / Out of this World”. Immerse yourself in a world as exotically beautiful as it is dangerous! You control the destiny of a primitive tribe against the backdrop of a world in constant evolution—a universe where mighty Nature reclaims what is hers; and your mastery of the elements is your people’s only chance of survival…

Age of Empires Online (PC) – The award-winning, best-selling Real Time Strategy game is moving online. Build mighty empires, manage resources, and battle with or against other players in epic historical settings. Craft and trade items, chat, and level up by completing quests. Plus, earn rewards for your efforts: new units, weapons, armor, and skills. And that´s just the beginning of this rich new experience.

Jerry Rice and Nitus’ Dog Football (Wii, PC) – Put on a jersey and grab a ball for the ultimate pet sports experience that will excite and entertain the entire family! Dog Football delivers the most delightfully humorous, pickup-and-play doggie action-sport game ever created for the Nintendo Wii. Tight game play meets dog-simple play calling to unite the competitive spirit of families everywhere. Up to 4 players can compete co-op or head-to-head to run, pass, catch, kick, and tackle their way into doggie stardom! No license, no leash… take a BITE out of the strike with Jerry Rice & Nitus’ Dog Football. Manual features a custom tutorial prepared by Just Flight to guide virtual astronauts back to Earth. Bonus version with limited features for Flight Simulator 2004 is included in the package

Get Up Family Game Sports (Wii) – Get up, Get active, Have Fun ! Get Up Games: Family Sports is the first product in a new line of active games that promise to get you up off the couch, playing games with the whole family. With 16 great sports challenges including track and field, gymnastics plus other Olympic events, Get Up Games: Family Sports will deliver a fun, heart pumping experience for everyone to enjoy.

Junior Island Adventure (DS) – Take a trip across a tropical isle! Follow the story of an Island boy on a quest to bring home the Three Holy Dolls. You must solve a total of 18 brain-teasing riddles and puzzles using memory, attention, and cognitive skills!