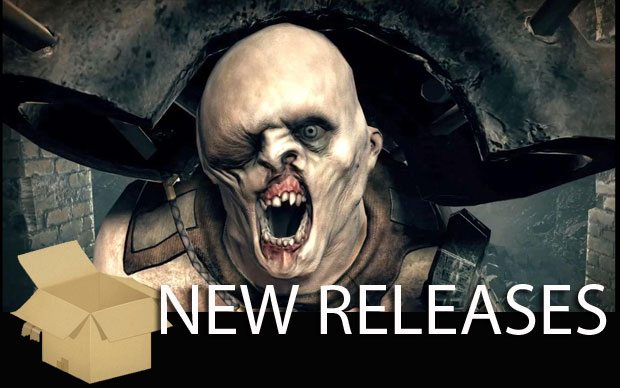 RAGE – (Xbox 360, PS3, PC) – RAGE® is a groundbreaking first-person shooter set in the not-too-distant future after an asteroid impacts Earth, leaving a ravaged world behind. You emerge into this vast wasteland to discover humanity working to rebuild itself against such forces as bandit gangs, mutants, and the Authority – an oppressive government regime that has a special interest in you in particular. Featuring intense first-person shooter action, breakneck vehicle combat, an expansive world to explore and jaw-dropping graphics powered by id’s revolutionary id Tech® 5 technology, RAGE promises an experience like no other.

Dark Souls (Xbox 360, PS3) – Enter a dark world filled with despair and threaded by hope where your ability to creatively strategize, learn and overcome unpredictable and unique challenges determines your fate. Dark Souls will demand your absolute concentration, unflinchingly punish your mistakes, but reward your ability to learn from death. Each challenge is a mind game met with endless combinations that will test your ability to creatively strategize a way to conquer unimaginable monsters and progress deeper into this bleak and forbidding environment filled with the un-dead.

NBA 2K12 (PS3, PC, PSP, PS2, Wii, Xbox 360) – With over 5 million copies sold worldwide and over 20 Sports Game of Year awards, last year NBA 2K11 allowed you to BECOME THE GREATEST with MJ & the Jordan Challenge mode. This year the NBA 2K franchise is back and bigger than ever, providing fans with the opportunity they’ve always dreamed of – to finally END THE DEBATE as to who are the best teams and players of all time. Featuring such NBA legends as Michael Jordan, Magic Johnson and Larry Bird as well as all of your favorite NBA players of today, NBA 2K12 will be packed with new and exciting features that will be revealed in the weeks and months ahead that, come October 4th, will put fans center court of an unprecedented basketball experience.

Payday: The Heist (PS3) – PAYDAY: The Heist is a premier quality downloadable game designed to deliver a unique spin on the First Person Shooter genre. As an intense, gritty and unapologetic episodic co-operative shooter, PAYDAY is packed with cocky attitude, epic Hollywood-inspired action and endless replayability.With six action-packed heists to complete at launch, players embark on a spectacular crime tour of heists, including shooting their way through a downtown bank vault robbery, trading hostages in an armored car hijacking and even a moonlit infiltration of a high-security headquarters.

Orcs Must Die (XBLA) – Slice them, burn them, skewer them, and launch them – no matter how you get it done, orcs must die in this fantasy action-strategy game from Robot Entertainment. As a powerful War Mage with dozens of deadly weapons, spells, and traps at your fingertips, defend twenty-four fortresses from a rampaging mob of beastly enemies, including ogres, hellbats, and of course, a whole bunch of ugly orcs. Battle your enemies through a story-based campaign across multiple difficulty levels, including brutal Nightmare mode! Will you roast orcs in pits of lava, pound them flat with a ceiling trap, or freeze and shatter them with a slash? No matter the weapons and traps you choose, you’re sure to have an orc-killing blast!

Just Dance 3 (Xbox 360, Wii) – Just Dance 3 kick-starts the party with over 45 tracks from multiple genres and popular artists including today’s hottest hits like “Party Rock Anthem” by LMFAO, “California Gurls” by Katy Perry featuring Snoop Dogg, and “Forget You” by Cee Lo Green. Also included are legendary favorites like “I Was Made For Lovin’ You” by Kiss.  With a variety of all-new gameplay modes, tracks with 4-part choreographies that allow up to 4 players to uniquely shine, and innovative cardio options, Just Dance 3 was made to keep the world dancing!

Chrono Trigger (PSN) – After 13 long years, the role playing game of the ages finally returns with Chrono Trigger for the PlayStation 3. This chapter begins when a newly developed teleportation device malfunctions, and young Crono must journey through time to rescue a mysterious girl from an intricate web of past and present perils. Enhanced for the PlayStation 3 with a host of great new features, this classic tale returns to a modern, home console.

Motion Explosion (Xbox 360) – This colorful and energetic family-friendly game is exploding with electrifying mini-games that keep your entire body moving fast-ducking, dodging, catching and balancing whatever might be thrown at you! From juggling soccer balls to dodging blocks to controlling robots to hacky sacking, Motion Explosion’s 12 games pack in 10 levels each, mixing it up along the way with additional gameplay elements like inverse controls, faster pace and new tricks to make you think quick on your feet and keep your body moving!

Tetris Axis (3DS) – The original portable Tetris game was a smash hit on the Game Boy system. The new Tetris: Axis game lets players use the magic of the Nintendo 3DS system to jump into the action in 3D without the need for special glasses. The game includes more than 20 different modes – some familiar, some new. Up to eight players can compete in wireless multiplayer battles, even if only one player has a game card**. Tetris: Axis also makes use of the augmented-reality and SpotPass features of Nintendo 3DS.