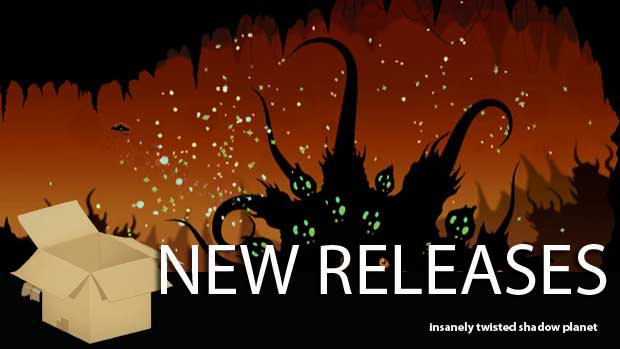 The latest video game releases for the week of August 1st, 2011.

Limbo – (PC) – Uncertain of his Sister’s Fate, a Boy enters LIMBO.  The title which recieved critical acclaim upon it’s initial release in 2010, is making a round two appearance on the PC this week.

Bleach: Soul Resurreccion – (PS3) – At last the popular manga/anime series makes its way to the PlayStation 3 platform! There are numerous anime-based video games, but many fall short in gameplay. Bleach: Soul Resurrección; however, faithfully represents the anime series with its beautiful cel-shaded graphics and combines it with amazing gameplay. The game style is simple enough for action game beginners, yet has enough features to satisfy hardcore players. The game follows the battle against the evil Arrancars, but there are times when you will be able to play as the enemy. This is especially exciting if you follow the manga closely, since you can be characters in the manga that are normally forgotten after being defeated.

Insanely Twisted Shadow Planet – (XBLA) – In this Insanely Twisted, 2-D action-adventure game, explore unique environments and battle bizarre creatures as you make your way toward the center of the mysterious Shadow Planet! Solve complex puzzles and upgrade your ship with alien technology as you fight to save your home world. Featuring both local and Xbox LIVE multiplayer game modes.

Phineas and Ferb: ATSD – (Wii, PS3, DS) – Inspired by the upcoming Disney Channel Original Movie, Phineas and Ferb: Across the Second Dimension on the Wii™ and PlayStation©3 computer entertainment system allows players to explore and conquer all new worlds in an action-packed platforming and combat game. The PS3 version will be the first time a Phineas and Ferb video game features PlayStation Move’s motion controller compatible gameplay. Fans will have the ability to play as one of eight characters including Phineas, Ferb or Agent P and overcome obstacles, use wacky gadgets unique to each character to defeat enemies. In addition, players can collect items, upgrade gadgets and unlock new playable characters while navigating through 24 thrilling levels in a quest to battle the evil Dr. Doofenshmirtz and his robot army to save the world.

Pirates of the Black Cove – (PC) – Join, champion, and unite the three pirate factions: Pirates, Corsairs and Buccaneers. You must ultimately leverage this unity in all-out war against the evil Pirates of Black Cove. Manage and develop parts of three strongholds and visit them to pick up faction and storyline missions. Visit the Alchemist to find out what special ingredients are needed for the wacky potions and embark on adventures to find and collect them. Unite the three Pirate factions to gain access to their hero units and ultimately take down the Pirates of Black Cove and become King of all the pirates. If you have what it takes that is.

Silkroad Online: Legend VIII – (PC) – Over 60 new quests will be added as part of the exploration of the mysterious temples dedicated to Jupiter, which requires players to be at least level 111 to enter! There’s also plenty of content for low to mid-level characters, with a streamlined and improved enemy monster AI which provides a more active, tactical experience to lower level players. All of this content is in addition to a flood of challenging monsters – over 100 new creatures will now inhabit the game world, including the new dungeons, waiting to pounce on the nearest character.

Sesame Street: Ready, Set, Grover! – (Wii, DS) – Join your Sesame Street friends on a healthy habits adventure! Get up and go with Grover, Elmo and Abby Cadabby through an exciting obstacle course that promotes healthy habits through fun, active gameplay.