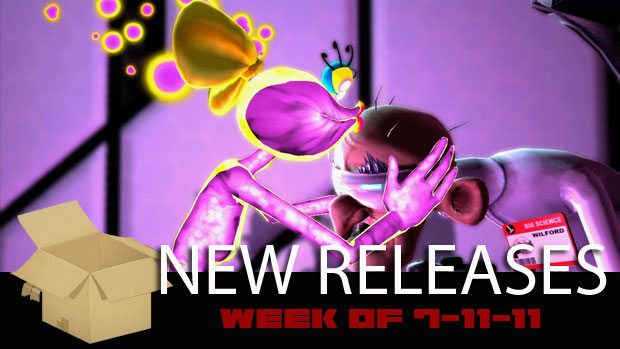 The latest video game releases for the week of July 7th, 2011

NCAA Football 12 – (Xbox 360, PlayStation 3) – NCAA Football 12 lets you experience the rise to dominance of a young, up-and-coming gridiron star hoping to make his way to a college superpower of choice and eventually a national championship. Experience the pride and pageantry of gameday Saturday like never before as you go from high school superstar, to top college player, to head coach in Road to Glory and Dynasty modes. With an enhanced in-game presentation, new traditions, and an all-new collision system, make an impact by leading your team to the National Championship with NCAA Football 12.

Panzer Corps – (PC) – Panzer Corps Wehrmacht is a brand new turn-based strategy game that reinvents a classic genre. Produced and developed by a team of experts and brought to perfection by a community of hundreds of fans, the game has evolved over 2 years to become what can be defined as a modern classic!

LA Noire’s Reefer Madness DLC Case Pack – (Xbox 360, PlayStation 3) – A tip from an informant leads LAPD Detectives Cole Phelps and his Vice desk partner Roy Earle to a local Los Angeles drug dealer. A deadly shootout ensues and suddenly Phelps and Earle find themselves in the throes of one of the city’s biggest narcotics rings

Ms. ‘Splosion Man – You got a problem? Yo, she’ll splode it. At the Big Science after-party celebrating the capture of Splosion Man, a spill of champagne shorts out the safety protocols on the splosionatrix and from it emerges Ms. Splosion Man. The latest creation from Twisted Pixel Games, the creators of Splosion Man, The Maw, and Comic Jumper, Ms. Splosion man comes packed with fifty levels of single player and a separate fifty level co-op multiplayer campaign. Included with the game are gamerpics, a premium theme, and some sweet avatar accessories! Expanded map features, tons of unlockables, ghost replays, and countless other improvements make this the definitive edition for any splosion connoisseur.

Boulder Dash XL – Rockford™ and Crystal™, heroes of Boulder Dash®, one of the greatest classic video games, get their bits and bytes together to make their Next Gen-Debut. Back in the 80’s, when hairstyles were wild, music was electronic and video games were sold on Music Cassettes in Europe (yes, it’s really true!), Boulder Dash® won our hearts by storm. The creative and frantic gameplay mix required both our reflexes and brains to avoid murderous rock slides of Boulders and get our hands on those precious Diamonds in 20 fun-filled Caves infested by Fireflies, Butterflies and Amoebas. In 2011 our childhood heroes take it to the Caves again on Xbox 360 in Boulder Dash® – XL™! Leaving the essence of what we all love about Rockford’s classic quest for Diamonds intact, Boulder Dash®