Orcs Must Die, Hands on at PAX Prime 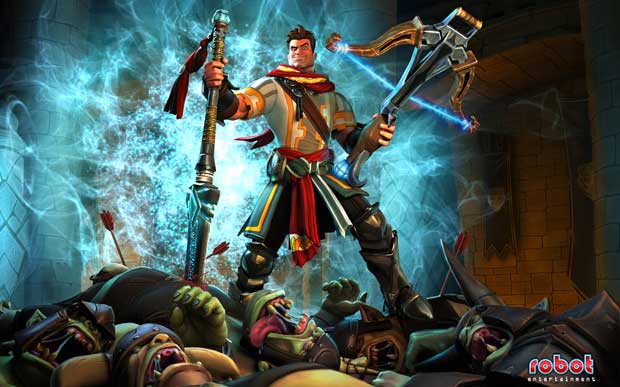 Orcs Must Die! is the latest from Robot Entertainment, and it could be one of the best games that aren’t on your radar.  The reason I say this is because it wasn’t on mine.  Despite having read some really promising previews and watching interesting videos from the developer, it was still failing to pique my interest.  Thanks to the long lines at PAX, and a lonely console tucked into a cranny of Microsoft’s booth at the show, I got to play through a solid hour of Orcs Must Die.

The game itself is a tower defense game played from the third person perspective.  Controlling War Mage, you’ll be tasked with defending your castle from an onslaught of Orcs and their allies.  The premise is simple enough, stop the incoming Orc army from breaking through your defenses.  To do this, you’ll be given the opportunity to set up traps throughout your castle.  These include spike traps, exploding devices, hot coals, archer support and many other traps that can be purchased at the beginning of a round.  Once ready, you’ll let the Orcs in and they’ll steadily stream towards their objective, with hopefully, a good majority of them being taken out by your careful planning.

When they do get through, since the game is played in the third person, you’ll also have weapons that can be used.  Your crossbow can be used from either the third or first person, and getting familiar with headshots can be extremely helpful in your fight.  For times when a more up-close and personal approach must be taken, you’ll also have a sword.   The combat can get quite hectic with the orcs coming in droves, so it’s absolutely essential to kill as many of them, or the other enemies with your traps. Each round will have any number of possible outcomes depending on which you traps you lay, and where. What makes Orcs Must Die! so promising is how well the game plays in both regards.  The placement of traps is enough to really have a good time with Orcs Must Die!, but when you throw in the extremely competent third person action of the game, it becomes exponentially better.

Orcs Must Die! is a very simplistic game in its design, but Robot Entertainment takes this simplicity in the Tower Defense genre and runs with it.  Giving you ample room for customization adds a layer of depth to the game, that other games of this type simply don’t have.  The presentation doesn’t offend the senses either, its a very well put together package, from what we’ve seen.  Being that the game has the distinct feel of a Saturday morning cartoon (albeit a very violent one), it’s simply a fun game that doesn’t seem to take itself too seriously.  Though not in the sense that it doesn’t offer challenge.  The tiered difficulty will have you wringing your hands at those blasted Orcs and their friends.  As you progress, levels become more complex with multiple avenues for the baddies to accomplish their objective. It’ll take some thinking if you want to rack up the kills with your traps.

This October, Orcs Must Die! will release on the Xbox Live Arcade and Steam distribution channels, and even if you have no intentions of purchasing, you should try the demo when available.  When you see how much fun can be had for $15, you’re tune just might change.