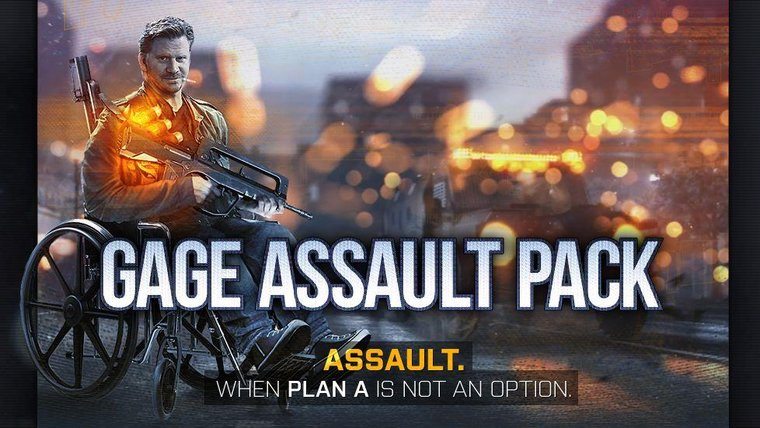 The developers at Overkill have decided to acknowledge “fellow Swedish developer” DICE by adding a Battlefield inspired DLC pack to Payday 2. The Gage Assault Pack, as it’s called, brings a slew of new content to the game and the marketing for it carries a familiar stylization. Needless to say, the timing couldn’t be better given Battlefield’s recent interest in the cops and robbers theme.

The $4.99 pack includes 4 weapons, 28 mods, 4 melee weapons, 4 masks, 4 materials, 4 patterns, and 10 achievements. The weapons, mods and melee weapons will receive a full reveal tomorrow, September 3rd. The rest of the content will be unveiled on Thursday, September 4th, the DLC’s launch date.

You can check out the official announcement here, where you’ll be treated with bass-heavy music reminiscent of EA’s shooter. A brief overview of the page does reveal a good deal of what’s in store for those wishing to forgo stealth in favor of heavy firepower that can “fill the air with high velocity rifle rounds”. Take a peak at the background video and you can see the aforementioned rifles in action, two of which are the FAMAS and G3.

Scroll further down the page and you may notice that Battlefield isn’t the only inspiration for this add-on content. Overkill must have been swept up with the Marvel hype following the recent Guardians of the Galaxy release because the pictured mask definitely looks like a twisted take on Thanos. We’ll have more news for you on the Gage Assault Pack as the official details of its contents start to emerge.