The latest news in the world of video games at Attack of the Fanboy
June 4th, 2011 by William Schwartz 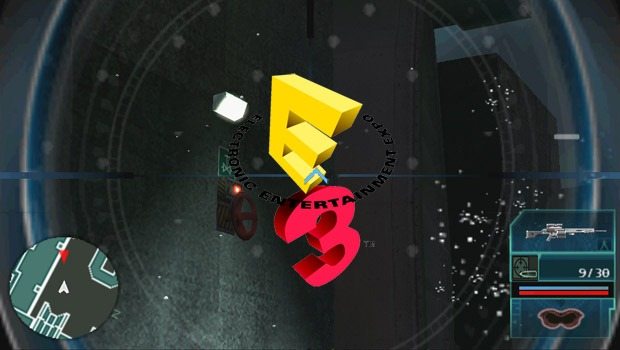 Well folks, the time is finally upon us. It’s hard to believe it’s been a whole year since Microsoft’s weird Cirque du Soleil thing, but nevertheless, here we stand just hours away from E3 2011 where the biggest names in the gaming industry will convene to showcase the most heavily anticipated titles for the upcoming year as well as to announce the next big innovations in this medium. Here is a rundown sheet for this year’s show:
Monday, June 6th

Microsoft – 10AM-11AM PT – Microsoft has a track record of holding the first press conference at E3 from year to year and this year’s conference won’t be any different. From all the news about popular titles going Kinect-enabled, I’m sure there will be some sort of news dropped regarding the future of the motion sensor device. I also presume that Mr. Bleszinski will be on stage at some point to show off a beta-improved Gears 3. According to several rumors circulating around, Microsoft may or may not confirm another level of Xbox Live subscription titled “Xbox Live Diamond” which will add IPTV services to the company’s online service. It will essentially make the 360 a sort of cable operator, though most of us already have cable and I’m not too sure another fee on top of an annoying $60 a year is the way to make a splash at E3.  My personal hopes include a confirmation of a Halo: CE reboot coming this November for the game’s tenth anniversary.

Electronic Arts -11:30 AM – 1:30 PM PT – Though EA has already revealed their lineup, don’t expect this press conference to go by without a bang of some sort. Judging by the list of the publisher’s upcoming releases, we can certainly expect to see some big-name demos including a lengthy one from DICE that will be showcasing BF3‘s hefty Frostbite 2 Engine. BioWare as well will take part in the action as they hopefully show us some of the first gameplay footage for Mass Effect 3, though here’s hoping its a standard demo and not a confirmation that we can pointlessly control Commander Shepard’s biotic powers using a Kinect sensor.

Ubisoft -1:00 PM – 3:30 PM PT – Expect Ubisoft to put emphasis on three of their major titles. One of which is Tom Clancy’s Ghost Recon: Future Soldier, a game that has all but officially been confirmed to have Kinect capabilities. A demo to display how the the waving of the player’s hands to control movements of squadmates is sure to take up a large chunk of the press conference. Secondly, Assassins Creed: Revelations will undoubtedly have its demo time or at the very least, a new trailer. Lastly, chances are Ubisoft will call some poor sap up on stage to showcase the upcoming music game Rocksmith where you can plug in an actual guitar to play. Is it too much to ask for Slash to be the one doing the demo?

Sony – 5:00 PM – 10:00 PM PT – No, I didn’t get the times wrong for this one. Sony’s press conference is indeed scheduled for an entire 5 hours. Of course, Sony has stated that it will not be limited to just news. Supposedly a concert  is to take place as well as a demonstration for the audience with the NGP, similar to how Nintendo let audience members interact with the 3DS after the show. Speaking of the NGP and after weeks of speculation, Sony is also expected to announce the renaming of the NGP to the “PS Vita.” I think most people would agree given Sony’s recent security and financial troubles that this is one of the most important E3 press conferences ever for the company. They certainly have some catching up to do in terms of re-assuring PS3 owners that they have a reliable infrastructure.

Nintendo – 7:15AM PT – 10:15AM PT – It won’t come as a surprise to any of you that Nintendo will be solely focused on one thing this year: the detailing and promotion of the 2012 Wii successor titled “Project Cafe.” Nintendo does not have to compete with Microsoft or Sony in terms of a new console announcement, so they will have the stage to themselves to  reveal the first of a new set of next-gen consoles. For this reason, it’s tough to not see Nintendo coming out victorious at the end of the conference.

Show Floor Opens – 12:00PM PT – At around noon, the Los Angeles Convention Center will officially be flooded with gamers and we’ll be bringing you all thenews/announcements/previews and getting them out as fast as we possibly can. It will be difficult to post a ton of videos as most of the show floor’s events are streamed live and broadcasted as they occur, but we assure you if there’s a video of a particular demo that can be embedded, we’ll do our best to bring it to you.

Yep, two more fun-filled days of incessant gaming news and previews/demonstrations of the most anticipated upcoming games. While the rest of the staff (myself included) is weeping in-between posts over the fact that we are not in sunny California trotting around the legendary walkways of the LA Convention Center during gaming’s largest event, our own Webmaster and Editor William Schwartz will be live at E3 2011 giving you up-to-date coverage of all the craziness and shenanigans  that will undoubtedly go down. When the smoke finally clears on Thursday evening, we’ll try to sort out all of the developments and bring you some in-depth previews of the show’s most popular titles. While we get ready to cover the epic event to the best of our abilities, what major news announcements are you guys hoping for? Comment and let us know!