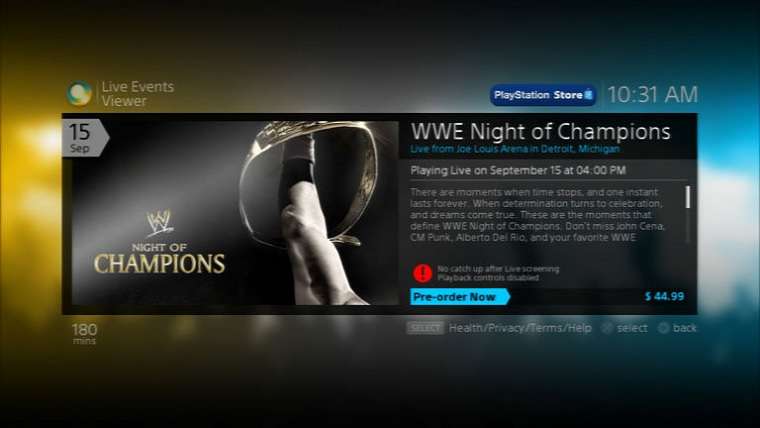 The PlayStation Live Events Viewer was introduced a few years ago as a means for watching live events on PlayStation consoles, starting off with the PS3. The app later arrived on PS4 and has been used for various types of events, but now it has been revealed that the app is being officially retired with another method of purchasing and watching events taking its place.

Sony sent out an email today to those that had previously purchased the app to announce that the PlayStation Live Event Viewer was being retired. In its place will be the option to purchase live events through the PlayStation Store, which will range from free PlayStation related streams at E3 and PSX to PPV events like UFC. After you purchase whatever event is available, you simply have to go to My Videos on your console and you will be able to start the live stream.

What is disappointing here though is that while PS4 owners will be able to purchase these events from the PlayStation Store, the retirement of the PlayStation Live Events Viewer sparks the end of an era for the PS3. Those who only have a PS3 will no longer be able to view live events, as the store will not offer such events like they will on PS4. This is going to be disappointing to those that have not adopted the PS4 yet, but considering that very few games are still releasing on the PS3, it does makes sense that Sony would move on from the console in this area.

Just remember that starting on January 10, all you have to do is visit the PlayStation Store on your PS4 and find the live events section to purchase them. After doing so, go to My Videos and fire up your stream to get started. While they are not available in one app, this should still be quite easy to do.