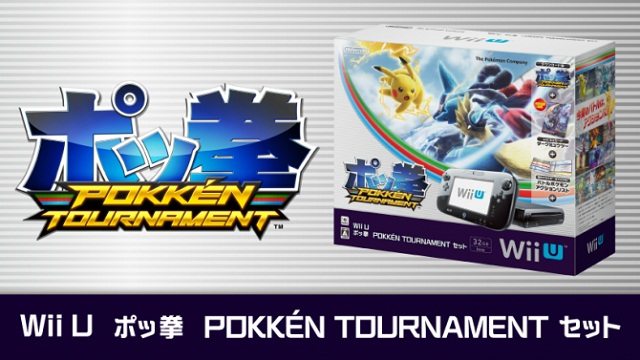 Nintendo has announced a Wii U console bundle that will include a copy of Pokken Tournament.

The announcement for a Pokken Tournament Wii U bundle was announced by Nintendo Japan. Nintendo did not announce if this bundle will be out in other countries just yet. The bundle is out from March 18th selling for 36,800 yen.

However, the Pokemon franchise is popular worldwide so it’s likely the bundle will be released in other countries. It will entice many people to buy a Wii U console. Nintendo will have a strong start in early 2016 as Star Fox Zero release a month later in April.

The bundle itself includes a black 32GB Wii U console that comes with the game pre-installed. It also comes with a Dark Mewtwo amiibo card as well as an instruction booklet containing all of the move sets.

Pokken Tournament is a new fighting game developed by Tekken’s Bandai Namco. It features many Pokemon in a traditional fighting game style fashion. The game was out in the arcades in Japan and is making its way to the Wii U on March 18th. A Western release date has yet to be announced, but hopefully it’s out shortly after the Japanese get the game.

Check out the new trailer for the game below: