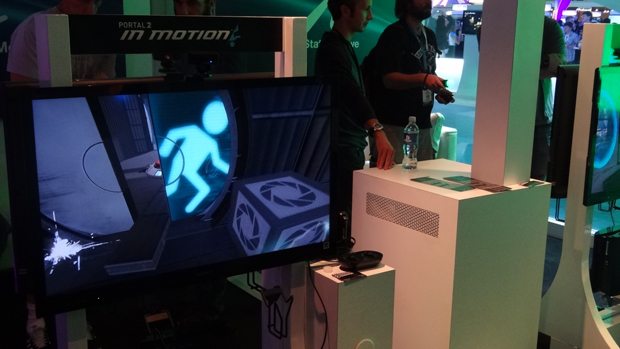 Wandering through the PlayStation booth at E3 2012 there were many games that could catch your eye.  There was the PlayStation All-Stars station, God of War: Ascension, and other big name titles that were hogging all the space.  Tucked away in the corner was a station set up specifically for Portal 2 and the opportunity to go hands on with Portal 2 “In Motion” was too sweet to resist.  Why it has taken Sony and Valve so long to get this project moving in the right direction is anyone’s guess.  After all, Portal 2 came out over a year ago.

Later this year though, Portal 2 will be getting additional DLC on the PlayStation 3 that enables the PlayStation Move with the game.  The Portal 2: “In Motion” DLC will bring several new maps into the mix, that allow players to use the motion controllers to manipulate, skew, and rescale objects to complete tests in the Aperture Laboratories.  If it sounds like something you’ve heard about before, it’s because you have.  Owners of the Razer Hydra and Portal 2 on PC have had this identical content for some time.

Getting hands on with Portal 2 “In Motion” was a bit of a bitter sweet experience.  The PlayStation Move is perfect for the puzzle manipulation required in the upcoming content.  Though it did pose the question of why? Why wait this long to introduce this functionality into the PlayStation 3 version of the game.  Sure, Valve is known for their long-legged games, but console players will have likely long distanced themselves from Portal 2 once this content finally arrives on the PlayStation Network.

And given Valve’s track record on the timeliness of releases, it’s anyone’s guess as to when this content will finally arrive.  Right now, it’s slated for later this year.  Despite denying the rumors of Move support for Portal 2 on the PS3 earlier this year, Sony’s E3 booth ensured that Portal 2: “In Motion” is definitely on the way at some point in the future.