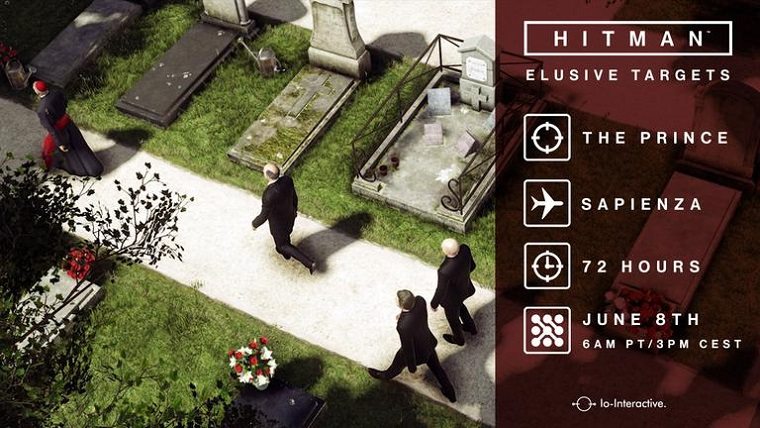 The third Elusive Target for Hitman is set to make his appearance tomorrow, and this time gamers will be trying to take down “The Prince” in Sapienza. Just as the first two times, gamers will have just one shot over the span of 72 hours to take him out. He goes live at 3:00 CEST / 6:00 PDT on June 8th on all available platforms.

Here’s a brief rundown on what Elusive Targets are all about:

“An Elusive Target is the closest thing to the Hitman fantasy that we’ve ever created. Each one is a custom-created character with their own backstory and their own unique reason for being in that location. We call them Elusive Targets because they are added to an existing location for a limited time in real-time and you’ll only have one chance to take them down. If you kill them, that’s the way that you killed them. There are no do-overs and no second chances. When an Elusive Target leaves the game world, they never return.”

– Elusive Targets are added to the game for a limited time in real-time. They won’t return.

– You only get one chance to take them down. If you die, you fail the contract and cannot retry it.

– Elusive Targets do not show up on the in-game map or Instinct. You need to locate and identify them with limited intel.

These Elusive Targets have ended up being pretty difficult for gamers to take out so far, with it recently being revealed that about half of the people who take them on end up failing. However, the rewards for successfully taking out multiple Elusive Targets are available. If you take out five of them you get the Hitman: Absolution suit, and if you take out ten of them you get the Hitman: Blood Money suit.