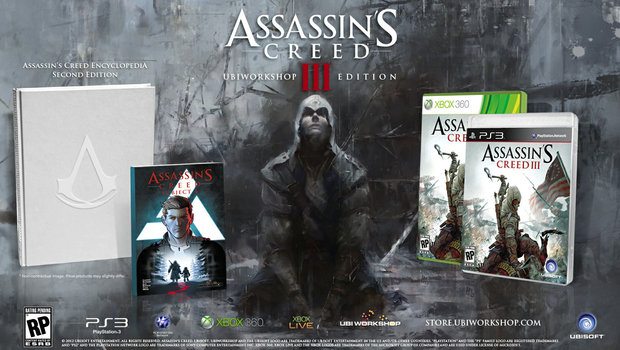 The whole ancient war between the Assassins and Templars is mystifying enough at times. Add in an evil corporation bent on going back in time by accessing ancestral memories and some dude with a hoodie seemingly caught in the middle of a bad situation, and you have on your hands one heck of a story. But don’t fret. Thanks to the Ubiworkshop Edition of Assassin’s Creed III, you can now own an encyclopedia that covers in detail all you need to know about the Assassin/Templar conflict.

If you plan on joining Ratonhnhaké:ton in Revolutionary America this Fall, this bundle is well worth the $100 asking price. But act quickly, the price is valid until July 4th when it will see a $10 raise. We’re guessing that Independence Day is significant within Assassin’s Creed III other than simply making you squeak out another Hamilton.
Source: Ubiworkshop.com