Behind the scenes at E3 with Square Enix and Tomb Raider 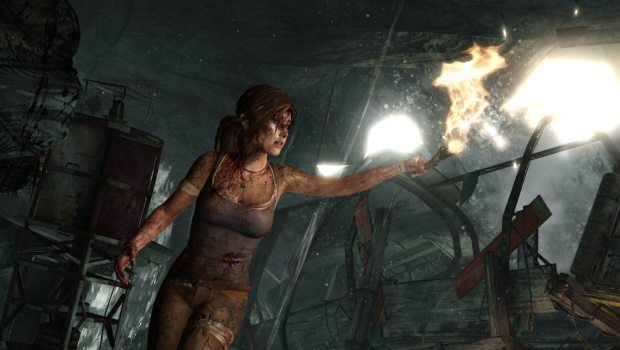 At this time last year, we were in awe at the direction Square Enix and Crystal Dynamics ambitiously planned on taking Ms. Croft and a game that has served as a staple of the action-adventure genre. At this year’s E3, we’ve been able to catch only short glimpses of the franchise’s evolution and what Tomb Raider will offer, but we were fortunate enough to catch an invite to a closed doors screening of the game which showcased some exclusive footage not seen on the show floor.

The demo picked up right where last year’s E3 Tomb Raider demo ended – with Lara stranded with nothing but the hopeless sight of a completely wrecked ship. As she looks out to the see to view the devastation, the camera panned to the back of Lara as the demoer took control of her. Her first task was to navigate her way across a gap between cliffs utilizing a fallen tree. Falling to the rushing waters and jaded rocks below meant certain death, and to highlight this fact, the camera switched to an overhead position to show you the consequences of just one slip. She’s able to walk the tree successfully and soon sees the rusty wreckage of a downed plane.

As Lara scaled the wreckage to advance to a higher cliff, I noticed that the climbing mechanics were clearly and directly influenced by Naughty Dog and the Uncharted series. The way in which Lara had her back arched and knees bent as she hung from a cliff crevice heavily resembled Nathan Drake’s method of getting around. Even when Lara wanted to jump small gaps to reach another crevice, she looked and reached out toward her next move like Drake so often does. It’s certainly not a bad thing, but it was no coincidence that the shooting mechanics and cover system of Tomb Raider we saw during Microsoft’s press conference were immediately reminiscent of Uncharted.

Lara finds the purse of her lost friend Sam and moves onward to try and locate her. What she comes across instead is a strewn up corpse, but he had a bow tied around his back, so in the end he proved to be more useful than creepy. Just in time, too, because Lara is starving and needs to find food presenting a great opportunity to show off the game’s targeting controls. As Lara pulls back on her arrow, the reticule gradually gets smaller and goes red, making the shot more accurate and powerful. The demoer also took this time to highlight one of Lara’s abilities: “Survival Instinct.” When initiated, the environment turns to gray hues and allow her to recall places she has been before, making it easier to navigate the environment.

Going back to your “Base Camp” allows you to upgrade any and all of Lara’s skills and abilities, and though we weren’t told when and where you can decide to set up camp, the feature serves much like save houses did in GTA. Lara moves onward to find a dimly lit and ominous cave-like structure. She decides not to turn back, but to go down a menacing-looking ladder that leads to what looks to be some sort of sacrificial room.

Once back outside, she finally finds Sam, but she’s sitting with a man who just doesn’t look to be on the up and up. In short, you know the guy is trouble the moment you lay eyes on him. Lara is cautious of the man and persuades Sam to follow her instead rather than take the advice of the savage who thinks they should all “stick together.” Suddenly, he pulls a knife to Sam’s throat and takes her hostage. To make matters worse, Lara chases after the, only to be caught in a bear trap.

Wounded and on the ground, a pack of wolves decide she might be an easy target for a meal. What they don’t know is that arrows hurt when flung with enough speed, and thankfully Lara is pretty darn good at shooting them. Each wolf flies at her, mouth gaping and ready to chomp, entering into a slow-mo sequence in which the players is able to pull out an arrow and take down each beast as they’re airborne. When the pack is finished, the other survivors from the shipwreck find Lara and take her to safety.

After a brief rest, Lara and Dr. Whitman find a cave door with ritualistic markings on it. To open it, Lara must find enough “salvage” (which can be found by looting the bodies of dead enemies) to upgrade her pick-ax. One pesky wolf is able to get a hold of Lara, entering into a sequence in which the player must rapidly shake the Left Stick to break free, followed by a button press to stab.

Once you find enough salvage for the upgrade and move with Dr. Whitman past the door, the two are soon ambushed by a group of salvages who take them hostage and begin burning the forest. You’re led to a section amidst the burning lush surroundings where others are also being held. Following one’s prisoner’s ability to break free, a mad scramble occurs in which the savages attempt to shoot any remaining hostages trying to run. As they’re distracted, you must navigate your escape route and avoid detection, hands still tied behind your back.

Hiding doesn’t work out well for Lara, as the group’s ring-leader finds her and attempts to get frisky, prompting her to knee him in the groin and bite the side of his face. Once her bonds are broken, a fight sequence occurs with a system of button combinations for the player to successfully press while the fight plays out on screen (again, much like Uncharted). The fight ends with the bad guy getting shot in the face with his own gun, leaving Lara to look on stunned and dejected at the gruesome sight.The demo concludes as Lara picks up the gun and stands tall, symbolically beginning her journey as the tomb raider we all know and love.

While we were honored to have the opportunity to witness Lara Croft’s metamorphosis from innocent ship cruiser to lethal gun-toting assassin, we hope that the game will be able to establish enough of its own identity and not rely too heavily on inspiration from the industry’s more modern action-adventure titles. Nevertheless, what we saw of Tomb Raider has us convinced that the game will be giving the beloved franchise a worthy reboot and praiseworthy prequel, taking a mature origins story and blending it with nail-biting action and solid gameplay mechanics.