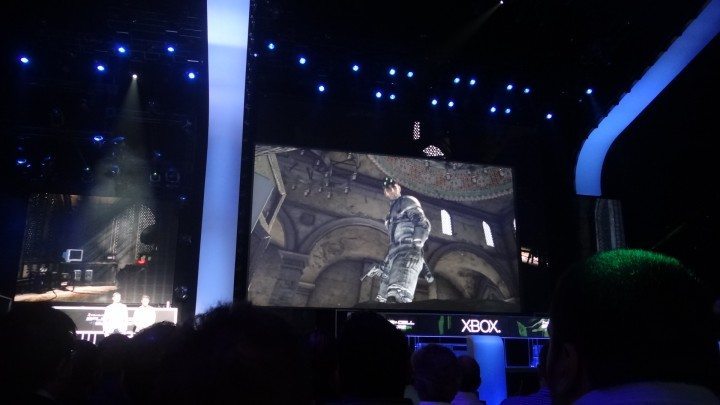 Sam Fisher is back, but he certainly doesn’t look like the stealthy operative we’ve come to know him as. Earlier today at Microsoft’s E3 2012 Media Briefing, Ubisoft unveiled the franchise’s return, although some longtime fans will inevitably view the new direction as a questionable turn.

According to a Ubisoft press release, Splinter Cell: Blacklist will feature a story in which, “a group of rogue nations have had enough of the United States’ military presence in their countries. In an effort to force the withdrawal of the U.S. forces, they mastermind “The Blacklist,” a countdown of escalating terrorist attacks on U.S. assets. Given a presidential mandate and the power to act above the law, players take on the role of lethal operative Sam Fisher. Outfitted with Sam’s infamous tactical suit and goggles, players will infiltrate terrorist cells while using ruthless interrogation methods to extract crucial information to prevent the next Blacklist attack.”

The demo began with Fisher infiltrating a terrorist interrogation. The first stealth-kill will make Splinter Cell fans of old feel right at home, however a sequence featuring Fisher plotting targets to take out in order and then executing in one cohesive combination may not have been exactly what fans had expected, but that doesn’t make it any less awesome. The sequence provided the audience with a glimpse at how Ubisoft is evolving the franchise and implementing some slick new features to set the game apart from similar games of the genre.

Though the old-school firefight towards the end of the demo might piss off some Splinter Cell purists, Splinter Cell: Blacklist looks to be taking the game to new heights while still retaining it’s traditional stealth elements. Look for coverage of Blacklist and much more as our E3 coverage gains momentum.