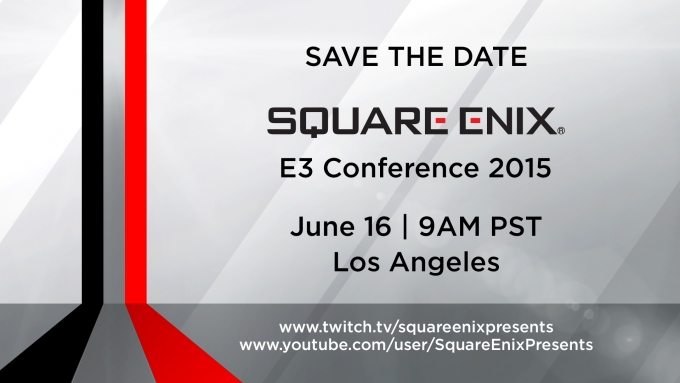 In a surprsing turn of events Square Enix now joins the list of companies that will be holding their own press conference at E3 this year.

Square Enix announced earlier this morning on their Official North American blog that they will be holding an E3 2015 conference of their own. Their conference is set to take place on June 16th at 9AM PST. They now join the likes of Ubisoft, Microsoft, EA , PlayStation and also Bethesda who announced their own E3 2015 conference a few months back. It seems to be a trend now, all that is left is for Activison/Blizzard, Warner Brothers Interactive, and Bandai Namco Entertainment to have their own conferences and all the major third-party publishers will just about be taken care of.

Square Enix will also be broadcasting their E3 2015 conferences live on Youtube and Twitch accounts. The translation for time-zones breaks down like this; 9AM PDT/ 5PM BST/ 1AM JST. I guess now it is just up to speculation as to what Square Enix could unveil. They already announced Deus Ex: Mankind Divided, I guess the next announcements could involve a new entry in the Hitman franchise or even a confirmed localization of Star Ocean 5. We will have to wait until June to find out.

E3 2015 is set to take place June 16th-18th in Los Angeles, California. We will be on hand to cover all the gaming news as it happens.