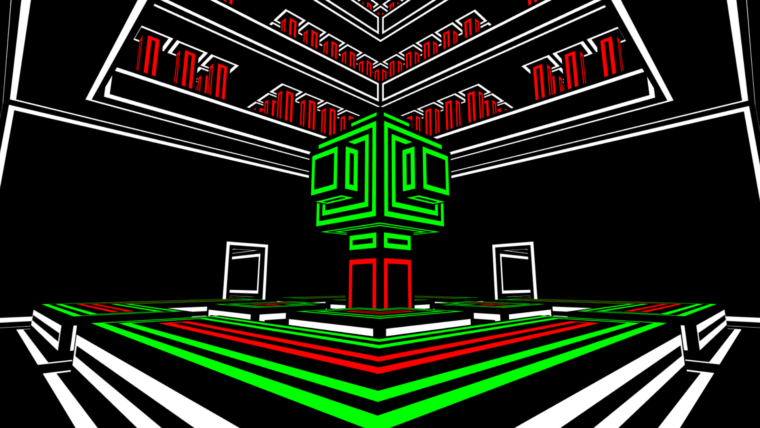 Sony has released the first gameplay video of VizionEck, a new first-person shooter that looks to totally reinvent the genre. In VizionEck you play as a “Ranger”, which is a remote controlled robotic cube that was specifically designed for combat. Each Ranger has a “Charge Block” which is above their main body, and acts as their main method of both offense and defense. Different colored Charge Blocks give the player different abilities, such as short range burst shots, “spray and pray” automatic fire, and an explosive round. There is a lot more to VizionEck, but really it has to be seen to be even remotely understood.

VizionEck is a competitive FPS, but its core mechanics have been rebuilt from the ground up

The idea behind VizionEck is to approach FPS games in a whole new way. The team has done this by including elements of both the platforming genre, as well as third-person shooter mechanics. Different colored blocks within the world will affect the player in different ways.

For example, green cubes act as bounce pads when landed on, or can lift the player up if they are covering the wall. Players have a certain number of times that they can jump, however landing on a red cube will stop all jumping, causing the player’s “jump count” to drop to zero until they reach another white cube. Blue cubes shift the game around the most by rotating gravity. After touching a blue cube the player can then jump through the ceiling, or onto a wall. That wall then becomes the player’s floor.

Tons of other changes have been made to alter traditional FPS gameplay. VizionEck is said to totally eliminate the problem of spawn camping by using “spawn rooms”. This is seen in the trailer above, as the room with tons of identical cubes. Only some of the cubes are active Rangers, the rest are awaiting a player’s death, at which point that player would spawn in one of the inactive cubes. Until it moves, there is no way for another player to know which cube is active.

Trying to explain VizionEck seems to be futile though. It changes too much about the genre for traditional terms to have the same meaning. The only way to try to understand is to watch the gameplay above and wait for the game to come out exclusively for PS4 later on this year.

In case you want to try to understand the game better, the official description for VizionEck reads: “VizionEck is a competitive first-person shooter, but its core mechanics have been rebuilt from the ground up. Spawning is different, weapons are different, cover is different, etc. This new and innovative gameplay is centered around VizionEck’s art-style. These visually simple cubes and mathematically exact outlines provide incredibly deep and competitive mechanics. Every situation can be approached in multiple ways, with no inherently bad choices. Destroying enemies and surviving is generally good, but in VizionEck nothing is black and white. Even self-destruction has positive outcomes depending on the player’s circumstances.”