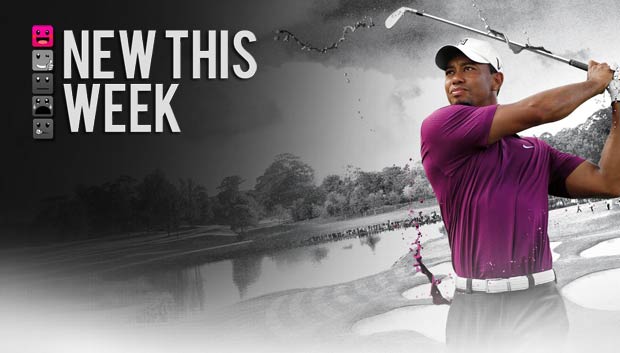 Ridge Racer Unbounded – Xbox 360, PlayStation 3 – Drive Hard, Create Anything, Destroy Everything With Ridge Racer Unbounded, the Ridge Racer franchise gears up to carve its own destructive path on a spectacular collision course with PlayStation 3, Xbox 360 and PC. Ridge Racer Unbounded adds an unexpected destructive dimension to the series, delivering an original blast of ferocious racing adrenaline. Join the Unbounded street racing gang and test your driving skills against rivals in every street and alley of Shatter Bay. Prove your worth behind the wheel to get respect and expand your turf. For endless race variety, use the simple but powerful City Creator to design amazing original tracks in minutes.

Tiger Woods PGA Tour 13 – Xbox 360, PlayStation 3 – The world’s #1 selling golf game is back and ready for another season of PGA Tour golf. Take your game to the next level with the first controller-free, voice-enabled and body tracking sports simulation to support the Kinect sensor for Xbox 360 (optional and sold separately). Put real-life swing in-game with Tiger Woods PGA Tour 13 as you experience revamped swing control, tackle Tiger Woods’ legacy and compete against the world’s best players at The Masters.

Collapse: Devastated World – Xbox 360 – Collapse is an action adventure game set in the year 2096, where creatures from another dimension are wreaking havoc across the lands.

Warriors Orochi 3 – XBLA – WARRIORS OROCHI series is a Action game to which invigorating action of a match for a thousand can experience the world of the different dimension which the Devil and Orochi made on the stage. Original elements, such as an original story in which Hero and others of “truth and Mikuni matchless”, and “Warring States matchless” both series plays an active part, and a team battle system which will be 3 sets and it fights, have obtained high support from you, users.

Horses 3D – Nintendo 3DS – The first authentic horse game for the Nintendo 3DS system, Horses 3D invites players to care for more than 15 realistic horses, ride them and train them for world-class performance. Horses 3D fully leverages the Nintendo 3DS features with the most realistic visuals for a horse game yet, including 3D horses, textures and beautiful environments, as well as StreetPass sharing and more.

Balloon Pop 2 – Nintendo 3DS – Draw, pop and match balloons for explosive fun in this re-invented classic for the Nintendo 3DS! Use your power bar to draw star lines to start a chain reaction, setting up electrifying combos while outwitting obstacles and unlocking items to help you in your journey through Earth’s wonderful seasons and holidays.

50 Classic Games – Nintendo 3DS – Jump into the most exciting collection of 3D games ever! Now your favorite classic pastimes are bundled together – from action and sports challenges to casino games and puzzles! It’s all right here, in 50 Classic Games for Nintendo 3DS! With new eye-popping graphics and interactive features, you’ll get lost for hours in the wildly entertaining games that range from backgammon to brainteasers!