Xbox Live and UFC, First Round is a Bloodbath

The latest news in the world of video games at Attack of the Fanboy
January 2nd, 2012 by William Schwartz 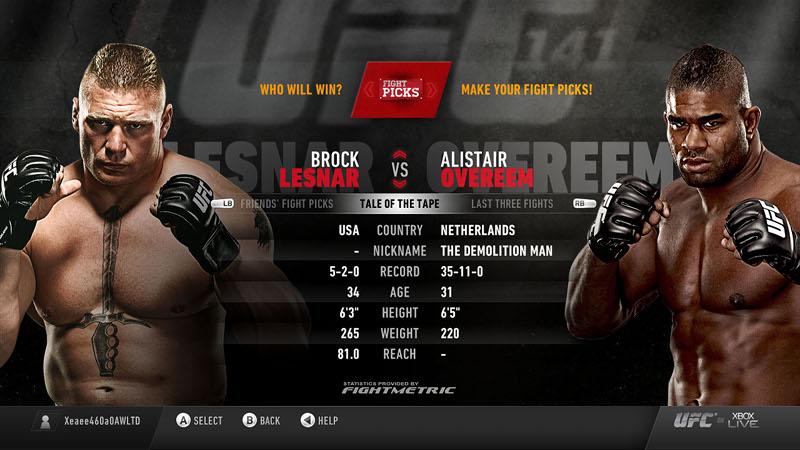 On December 30th, Microsoft and the UFC showcased its recently announced partnership to stream UFC events directly to the Xbox 360 by giving out virtual tickets for the highly touted Lesnar vs. Overeem Heavyweight Title Fight.  This sounded like a great idea.  The convenience of live streaming and the social aspects of Xbox Live, make the UFC partnership a win-win for the two companies.  However, the new service left most who came in contact with it in one way or another, disappointed.

First off, this wasn’t a come  one, come all event.  It was closed to a few thousand people who hammered the Xbox Live servers trying to get in on the free promotion.  More importantly, the ones who did get “a ticket” to view the fight took the Xbox 360 forums to voice their disgust in the fact that they were booted from watching the fight, unable to connect to the application on the dashboard, with neither Microsoft or The UFC offering recourse for the problems.  A quick jaunt to the Xbox 360 forums will tell a story of disgruntled fight fans who missed the fight in its entirety, due to technical wrinkles that probably should have been fixed before going live on a big holiday weekend.

Hundreds  of fans that took the time to voice their complaints, explained connection issues, getting kicked from the servers moments before the fight began, and never being able to log back in to watch the fight.  As fight fans do, many got together with groups of their friends to watch the fights, which not only made the new service look bad to existing customers, but to potential ones as well.

Eventhough this event was supposed to be free for the fans to advertise the new service, it’s safe to say that it might have done more harm than good.  While other streaming services have made a good name for the convenience factors of digital distribution, this poorly planned event might have set back this partnership, and possibly other streaming services Microsoft has in store on the Xbox 360.

Home / Game News / Xbox Live and UFC, First Round is a Bloodbath