The latest news in the world of video games at Attack of the Fanboy
December 10th, 2014 by Dean James 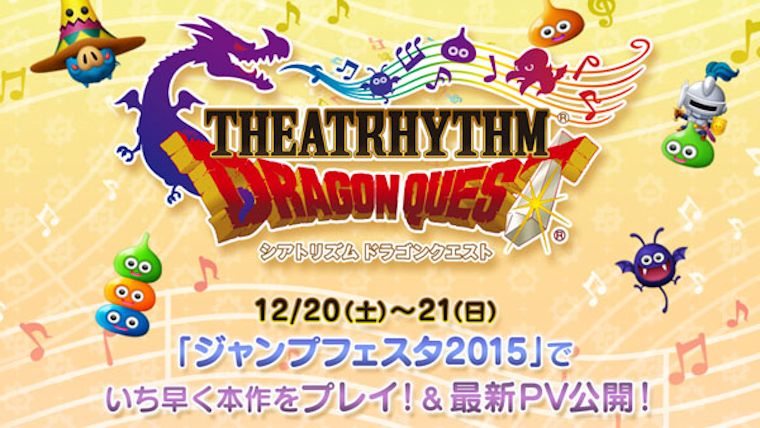 Square Enix first introduced us to the Theatrhythm series with Theatrhythm Final Fantasy back in 2012. That was followed earlier this year by a combination sequel/remake that offered not only a number of the original songs, but tons of new ones as well. We saw the inclusion of music from other series including Bravely Default and Romancing SaGa, but now it has been revealed that another very popular Square Enix franchise is getting its own Theatrhythm game, this time Dragon Quest.

Square Enix completely out of the blue announced that Theatrhythm Dragon Quest was going to be coming to the Nintendo 3DS. Not only did they reveal this news, but also that it was already scheduled for release in Japan on March 26, 2015. The announcement is a little big surprising, as the first gameplay footage for Theatrhythm Dragon Quest will not be coming until next weekend during Jump Festa, which could have served as an excellent spot to make the reveal.

The teaser site for the game is already up as well, which can be found right here. Dragon Quest certainly doesn’t have as iconic of music as Final Fantasy, but still has a solid library of songs. With another Square Enix series getting the Theatrhythm treatment, one has to wonder if they will attempt more if this is also a success. Making one based on Kingdom Hearts seems like a perfect fit, but any other Square Enix franchise might not have enough to fill a full game.