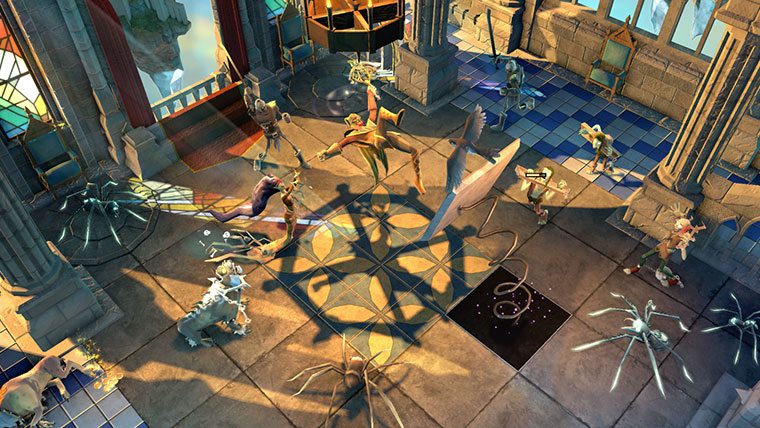 The Mighty Quest For Epic Loot has been out on Steam as a beta for a few weeks now and it’s turned out to be an interesting exercise so far on the part of Ubisoft Montreal.

It’s set up as a twist on the tower defence genre, where you need to build up and defend your castle against other players while you work on skilling up your archer, warrior, or mage to be able to raid and loot the castles of other players in turn.  Successful raids earn you experience, gold, and crowns as well as random loot drops (a la Diablo) which may or may not be useful to your character.  The raiding aspect of gameplay plays like a hybrid of Dungeon Keeper and an isometric Team Fortress 2 as you try to smash through the defences that other players have put in place to protect against you.  If you manage to get to the opponent’s treasure room within a set amount of time you are rewarded with maximum loot and XP, longer completion times decrease the rewards and death amounts to failure.

Its cartoonish and lighthearted design, along with casual banter and bravado are reminiscent of Valve’s Team Fortress 2, a similarity further enhanced by the ability to buy or be awarded custom vanity gear for your character.  Seeing as this is on the Uplay content delivery system as well, it seems to be an attempt to legitimise the digital distribution service and move towards a more balanced approach to the publisher’s presence, rather than just another form of DRM.  I wouldn’t be surprised if future purchases of Ubisoft titles awarded exclusive costumes, skins, or gear as well.  Its casual nature is also designed to appeal to players of social networking games, but this in turn means that there are tasks that necessitate daily interaction.  The gold and mana mines in TMQFEL for example need to be attended to regularly if you want to reap maximum benefit from your castle and buff your defences.  Also the fact that each raid on an enemy tower takes less than 5 minutes is a clear indicator that Ubisoft is going for a repeating experience with this game; log in, collect your accumulated wealth, raid a few baddies, check in with your friends, rack up a few more achievements and then log off.  Rinse and repeat the next day. 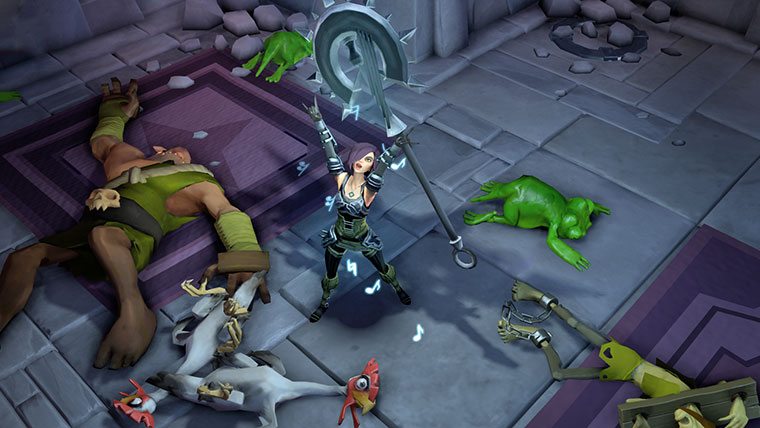 This really is a Diablo-TF2-Dungeon Master-Farmville game and make no mistake.  As soon as you start upgrading your summoning portal so that you can add some bigger badasses to your castle and you see the ‘Finish now for 10 bling’ message, you know you’re in social network gaming territory.  The ‘bling’ is the in-game currency that has to be bought with real world money or can be earned in meagre portions by completing challenges and adding friends.  It follows from this that with enough ‘bling’ you’ll be able to buy your way to an impregnable fortress and an impressive character with some pretty unique gear.  Further to this, the gameplay is ridiculously simple; your taskbar has four combat hotkeys and you click on the place you want to go to or the thing you want to kill.  The game is designed for simplicity.  It’s easy to master and easy to play, but there’s enough of a challenge to motivate veteran gamers to bling-out their toon and their castle in a variety of ways.

Players can go for oak panelled halls or prison-like corridors for their castle, and each piece of gear has a distinct enough appearance to make your toon stand out as being somehow different form anyone else’s.  The variety of weapon models and animations is also refreshing to see, and adds to the sense of achievement when you upgrade your gear.  The cosmetic changes in your character and your own castle are nice, but the escalating costs involved do mean that the player will be expected to spend a far greater amount of time raiding, building his/her castle and organising defences.  As you build potion makers, armourers, architects and other services essential to the running of your castle, your demands on these increase to the point where you need to invest tens of thousands of gold in order to upgrade, and the upgrades take progressively longer.  Unless you want to blow some ‘bling’ and cut the wait time.

I can see how a lot of thought and planning has gone into this game, and one of the aspects that will appeal to many players is the prospect of laying out your own castle, filling it with highly trained bad guys, and reading the daily log of players who have attempted to loot your castle and fallen victim to your impregnable designs.  At the castle architect you are able to choose from a huge range of passages, ramparts, rooms and corridors, each with tactical advantages for defense.  Top this with some well placed traps and there’s a good chance you could have a sparsely populated castle defend successfully against a high level character.  This game has fairly good design in that any player can, with a carefully placed spring trap and a demolishing-ball robot, turn a simple encounter into a deathtrap.  How could your melee fighter manage a standard close quarters encounter for example, when there’s a healer regenerating the mob you’re hitting and a fire trap dropping flame bombs on you because you’re in its range?  The endless permutations of effective dungeon creation are enough to make this a challenge for players of any ability level.

The Epic Quest for Mighty Loot is a lighthearted game that tries not to take itself too seriously.  Even the introduction that sets the scene for the game’s scenario resorts to a ‘blahblahblah’ as if it acknowledges that the backstory isn’t important – all we want is to make a toon and kill some stuff.  If you like the idea of a game that lets you play casually for half an hour or so each day and if you’re not put off by the idea of a grind, then this is worth a look…if you can bring yourself to have yet another digital distribution service vying for your PC.