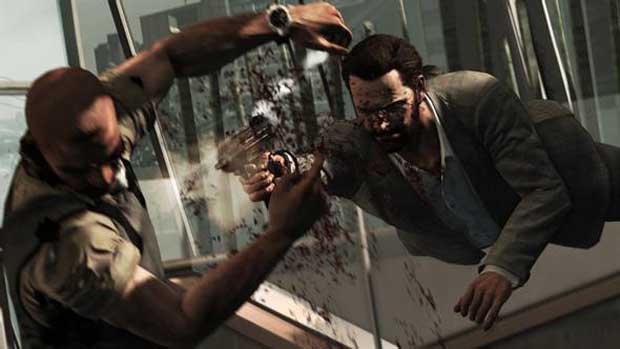 Ahh, the yearly Rockstar game.  On a constant basis, they’ve been putting a great product out onto the market for a while now.  It’s been 9 years since the last Max Payne, and was only a matter of time until they revisited the series.  I’m going to break down where I stand on Max Payne 3 based on everything they’ve shown and talked about to date.

From trailers to interviews, I’ve got rants and raves about Paynes’ new adventure that’s releasing this spring. I’m 100% on the gameplay being top notch. Pretty much everything we’ve seen makes it look like it will play incredibly well. The overall package is something that I’m still on the fence about though. The most recent trailer they’ve put out (#2) actually made me slightly worried about the game from some standpoints. Surely it will bring it very high scores, but that’s no reason not to seriously speculate on it.

For one, I do enjoy games to shine in the graphical department, but I’m not put off when something doesn’t have as high of a budget for visuals.  GTA4 may not compare to recent graphical powerhouses such as Uncharted 3, ect. but it is still an amazing game to this day no less, and looks pretty good.  However, if there was one word to describe the visuals in the Max Payne 3 trailer, underwhelming would be it.  Everything from character animations that seem sort of stiff and janky, to bad textures. It just falls somewhere short of par. Not just in comparison, but in general.  Considering all they’re showing you is a tiny presentation of the game, you’d expect they would choose something with that impressed. I definitely expected to see visuals that were better, especially considering they’re going for a realistic graphical style.  Not a game killer, but still something.

On to the next one;  The story could seriously go either way for me.  Just from watching the trailer, it took me a minute to think of where they could go that setup that would be interesting.  Max getting contracted by a friend to find his captured trophy wife? It just sounds a little played to me. You’d have to hope their would be another underlying reason for this quest that he’s not fully disclosing. It does bring a few questions to mind though. Why wouldn’t this dude Max is helping just get grips of dudes to go find her and get her back in reality, if he’s that rich & powerful of a figure. It’s questions like that I have that I seriously hope they plan on answering, or else that would become a problem for me. You have to make the premis somewhat believable and seriously explainable as to why Max Payne is where he is. There really has to be something else in the equation, or I’m going to be worried if it plays out that simple.

Also, I feel like the dynamic between the characters has to be just that. Truly dynamic, at least to keep me caring about what is happening to this cast.  Max is kind of a bad person in the first place, and comes off now more than ever as a one-sided protagonist to me.  Back in the original series, Max Payne was the ultimate parody of action movie heros.  When at this point, it seems like that tone of parody has been dropped completely.  What are you left with?  Hopefully not the dark, played out, generic character Max is shaping up to be in his 3rd adventure.  Hopefully there will be more to it. Max might be changed as a character, and we may be moved as players. I just don’t know, though.

On the flipside, I’m seriously interested in the combat, and it seems like that may be more the focus of the game anyways. With a multiplayer mode already being revealed as a large part of the title, and all sorts of awesome gunplay on the wire, I’m sure it will be fun to play. I know it will be a good game.  I never was worried about the core gameplay, though. It will look good enough, and will play great without a shadow of doubt. Their will be all sorts of off the wall (literally and figuratively) antics and epic takedowns, for sure. I can’t wait to experiment around with the variety of combat scenarios I’m sure there will be. Not to mention a full fledged multiplayer mode that may turn out to be one of the greater experiences this year on the multiplayer front.

I’m just worried about the story being well written & interesting at this point. The characters and the conflict, I’m really not sure of. The setting of Sao Paulo looks like it will make for a more unique locale at least. We all know it will play great, and that’s a pretty big part of the equation. Who knows, it may seriously confront all my questions and concerns and put them to rest. We’ll know soon enough.