The latest news in the world of video games at Attack of the Fanboy
October 27th, 2017 by William Schwartz 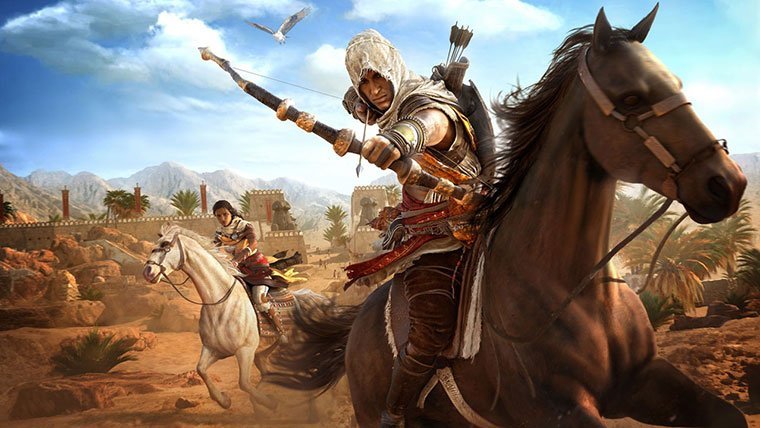 Ubisoft took a year off with the Assassin’s Creed series.  It was an unprecedented move as there’s been a new release (sometimes more) each year since 2007.  During that time the franchise has undoubtedly moved forward. The changes have been incremental, and the game has gone in a number of directions in terms of story, but fatigue had begun to set in.  Looking back at my last review of the series in Assassin’s Creed Syndicate, we echoed these sentiments.  It was a game that was structurally sound, but one that hadn’t introduced anything new.  In many ways that review was one of the series in general, and apparently Ubisoft saw this reaction from enough people to go back to the drawing board for Assassin’s Creed Origins.  Not entirely rebooting the series with this game, Ubisoft picks their spots, refining the game in key areas like visuals, combat, and progression while retaining many features from previous games in the series.

Ubisoft has chosen some interesting locations for the settings of their Assassin’s Creed games and Origins is once again a new destination with Ancient Egypt.  It’s a prequel of sorts, that tells the tale of the “Origins” of both the Brotherhood of Assassins and The Templar Order.  The new protagonist for this story, Bayek, teams with historic figures throughout the game like Cleopatra and Julius Ceasar to overthrow The Order and kick off a battle that will span 100’s of years.  While Ubisoft has taken different routes in recent entries in the series, Origins once again features a modern day element to the game.  Introducing a new Abstergo employee who is doing historical research using an Animus that is remotely located in the tomb of Bayek. 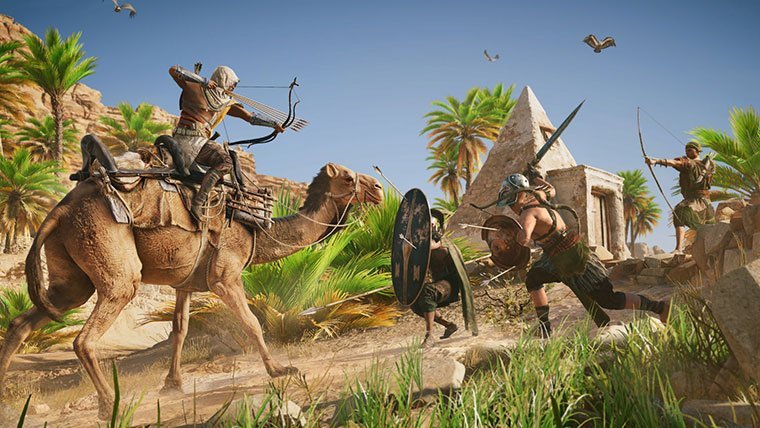 Given the extra time that Ubisoft has taken with Origins, a lot is expected of this title and for the most part they deliver.  While it’s not a quantum leap in terms of any of the features in the game, there’s a lot that’s been added to it that make it feel like a new yet familiar experience.  Ubisoft is no stranger to making massive open-world games, and Egypt is gigantic.  The lengthy campaign takes you across numerous regions and it feels like the developer’s biggest one yet. Upgrades and refinements to both the graphics and gameplay formula are found everywhere in Origins.  It’s certainly beautiful to look at, it’s fun to explore, and feels more alive than previous games.  A day night cycle has been introduced that has NPC characters with their own routines.  Little touches are found all over the game in terms of visuals that really make this game stand out amongst others in the series.  It’s a more colorful world to explore than any of the games before it, and there’s obviously been an attention to detail paid when it comes to the game’s lighting techniques.  That said, you can still very much tell this is an Assassin’s Creed game, even at first glance.

Refinements to both the graphics and gameplay formula are found everywhere

Perhaps it’s the year off, or perhaps Ubisoft has shed some of the bloat of previous games, but activities feel more meaningful due to new loot and progression mechanics that have players constantly building towards a more powerful character.  Each and every activity that you do will give you the opportunity to progress.  Whether that be by collecting currency to spend at the town’s Blacksmith to upgrade weapons, finding trinkets to sell, or uncovering powerful weapons and gear — there’s always something new to try just around the corner, and this progression ultimately gives your character agency in the story.  Origins feels like Ubisoft has learned a little something from the Far Cry series and tried to incorporate some of the things that make that open world game so much fun as Bayek has numerous tools to work with in his efforts across Egypt. 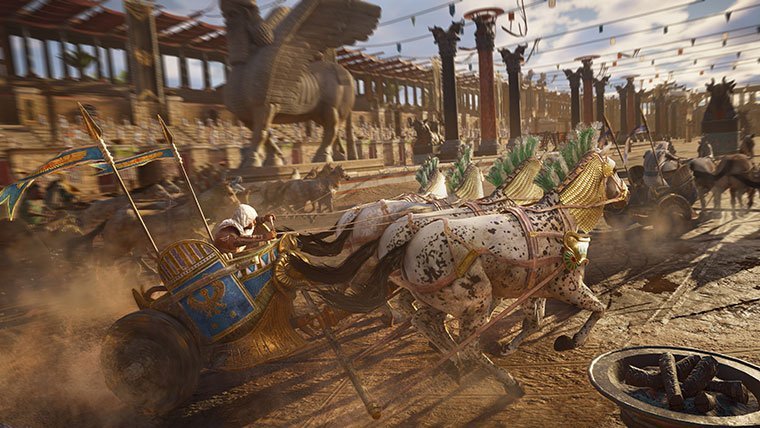 Mission structure has been tightened up a bit in Origins.  The boring follow and eavesdrop missions from the previous games in the series have been supplanted with more variety.  That variety comes in the form of missions that feel more open-ended.  While your goals might be the same, they can be accomplished in a number of ways.  You’re given the ability to scout ahead in Origins by using Senu, Bayek’s feathered companion.  This allows you to scout areas for enemies, locate targets of interest, and form a plan before heading into enemy territory.  This is when Origins is hitting on all cylinders, but it’s not always the case and the game occasionally stumbles into the mundane in some key points.  This mainly comes in anticlimactic assassination missions which throw out this free flowing decision making and often times have you needing to follow a very specific path to complete your objective.  While it’s not always the case, there a big moments in the game that hit with a thud.

Mission structure has more variety but combat is still a dud

They’ve still not managed to make combat enjoyable either.  Instead of the blocking and countering system in previous games, a new system has been put in place that is an improvement but still feels a little clunky and will likely need further refinement in the games ahead.  It’s a step in the right direction, but while Ubisoft is constantly scanning what works and what doesn’t in their games to incorporate them in each other, they certainly could’ve taken a closer look at For Honor when it comes to combat for the Assassin’s Creed series.  As it stands, combat feels imprecise and you’re never quite sure what you’re going to get when you choose to attack, defend, or simply dodge out of the way.  It leads to a couple of things in this game.  The first is a good bit of button mashing when fighting just a single enemy.  The second is a a lot of “re-synchronizations” if fighting a group.  My lack of enjoyment of the combat lead to a couple of things in this game that had me enjoying it even more.  First, I used the scouting system far more often, and utilized stealth as my primary approach to almost every engagement.  Second, it made me think outside of the box when it came to my approach on any given mission.  Origins is a far more dynamic game than its predecessors, with environmental hazards, wildlife, and other tools in your arsenal that allow you to approach things how you want to.

Climbing and movement feel just right when out in the world

Combat has never really been all that great in these games and another aspect of it that’s been worked on and refined over time is the movement mechanics when navigating the world.  Assassin’s Creed has always been a game that featured a lot of climbing and world traversal.  Some games in the series have been downright frustrating in controlling the character, but this is one of the spots that Origins gets right for the most part.  While you can still see some remnants of the old clumsy system, Bayek feels agile and easy to control whether on foot, or climbing.  Ubisoft seems to have made more surfaces climbable in Origins.  Where previous games in the series had you guessing, this game takes a page from Monolith (Shadow of War) in letting you feel like you have a bit more freedom.  Sure, there are still times where you’ll accidentally climb a pole or hop onto something that you might not have intended to, but on the whole controls feel great here and you never feel burdened by them as you had in previous games in the series, even after you’ve climbed your fiftieth synchronization tower. 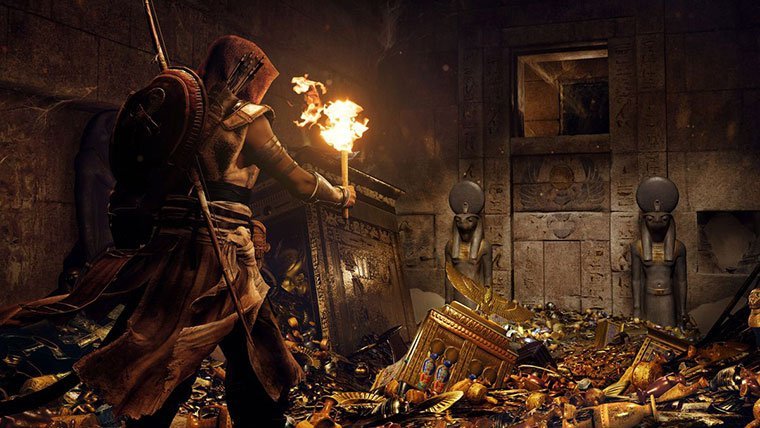 There are a ton of main missions and story missions in Origins, but a lot of the fun comes from exploring the world.  Ubisoft rewards the curious very well here as the game is structured very much more like an RPG than previous iterations.  While all activities will earn you points that can be put into one of three ability branches, there’s also a crafting system that has you hunting the wildlife of Egypt to procure hides, minerals, and other items that can help you improve your equipment.  There’s a full blown loot system in Origins that some will love.  You’re constantly finding things out in the world that can completely change the way that you approach combat as there are numerous weapon types, in different rarity tiers, with varying buffs tied to them.  Of course, if you find a weapon you like, you can stick with it as well.  You’ll just need to upgrade it at a Blacksmith Merchant as you progress in level.  The loop of finding new weapons and upgrading both Bayek himself and his tools to tackle more difficult enemies was rewarding all the way to the very end, regardless of which type of playstyle you adhere to.  Whether you’re out stumbling across ancient tombs and finding treasure or looting an enemy encampment, there’s always something both fun and rewarding to engage in, in Assassin’s Creed Origins.

More free flowing and dynamic than any game in the series

Ubisoft’s non-restrictive approach to how you tackle Assassin’s Creed Origins is a refreshing return for the franchise.  Where previous games in the series felt more task oriented, Origins feels more free flowing and dynamic — something more along the lines of a Bethesda RPG that’ll have you scouring this massive world for great loot or interesting side stories.  I wasn’t sure if Assassin’s Creed would ever get it’s mojo back, but Origins is probably the most well-rounded game in the series.  It strips out most of the mundane tasks that you have in open world games of this nature, and gives you more freedom to explore this vast playground.  While it doesn’t always hit the best notes in story missions on the main path, a good open world game is what the player makes of it, and Ubisoft gives you all the tools you need to have a great time.

Not completely back to the drawing board, Ubisoft takes some of their better old ideas and blends them with new ones to make one of the best Assassin’s Creed games to date in Assassin’s Creed Origins.