Batman: Arkham Asylum brought new hope to gamers everywhere. For one, Rocksteady proved that video game licensing could be successful commercially and resonate with the fans.  And two, they proved that it is indeed possible to harness the power of a super hero, and have that power translate on the screen.  If you’ve been gaming long enough you’ve likely experienced your fair share of bad uses of licenses.  Some memorable failures in the Spiderman, Superman, and Transformers series’,  have proven to be little more than a quick cash in to generate extra revenue upon release of a big movie.  Though somehow, Arkham Asylum managed to shake these stigmas with a game full of passion and personality, while staying true to its comic book roots.  I guess the real question is, does Batman: Arkham City capture the same magic?

Batman: Arkham City does for the most part have that same magic as the first game.  For good, and for bad.  Rocksteady has taken their core infrastructure of Batman: Arkham Asylum and really ran with it.  Opening up the world for a greater sense of exploration, they’ve given the player all the tools necessary to really get immersed in the the prison that is Arkham City.  While Batman: Arkham Asylum was a much more linear experience, this time around, Batman will have many more opportunities to dig deeper into the lore of Bob Kane’s world.  Depending on which side of the fence you sit, this deviation from the more linear formula of the previous game will either be good or bad.  The good part about it, is that there is so much more to do in Batman: Arkham City than there was in the first game.  Side missions include picking up Riddler trophies to foil Edward Nigma,  a mini game where you’ll be in a race against time to stop Victor Zsasz from killing innocents, among many others that are introduced along your way in the form of villains that don’t really play into the actual main quest.  While none of them feel forced, the bad part about having so much do, is that you can get side tracked from your current objectives.  Arkham City is a time based game, that relies on you feeling a sense of urgency to eliminate a threat to the city of Gotham.  While all of this new gameplay is welcomed with open arms, it’s certainly not incorporated without taking some steam out of the story.

While all of this new gameplay is welcomed with open arms, it’s certainly not incorporated without taking some steam out of the story.

It’s extremely easy in Batman: Arkham City to just go off and get lost on some of the challenges that don’t have anything to do with the main story. AR challenges will have you proving your gliding prowess, other side missions will give you both additional experience points and unlockable weapons, there’s really a wealth of content to unlock in the game.  You’ll see that, as soon as you enter into the UI hub that acts as your guide.  The map of Arkham City will constantly be updated with new side missions to explore, each with a specific explanation of the task at hand, should you choose to set it as your waypoint and embark on the mission.  As you do complete these missions you’ll be able to spend your earned points on equipment modifications that increase any number of things for the Caped Crusader.  Digging into the Wayne-Tech vault you’ll find that enhancing the Batsuit, upgrading gadgets, new combat combinations, and predator takedown moves are all viable options to equip on your character as you progress through the game, as well as upgrades available for the Catwoman portions of the story. 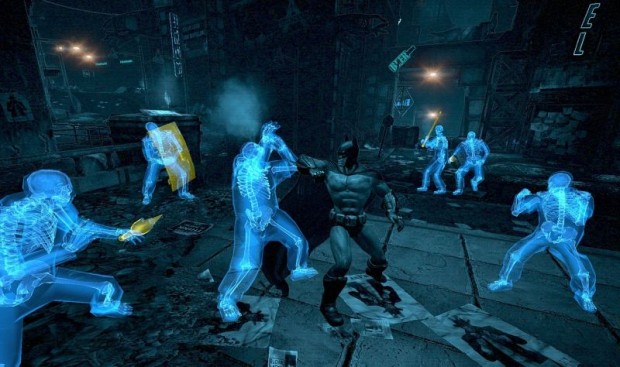 What hasn’t been changed is the hard hitting combat of the previous game.  In my opinion, Batman: Arkham City is easily one of the best beat-em ups out there today.  In a gaming landscape littered with button mashers, Arkham City won’t let you get by that easy.  While in the early goings you may be able to get by with little thinking, like the previous game, as you progress you will be facing a wide variety of enemies that require precise combinations to disarm and defeat them.  So many varieties that you could say Arkham City can be downright cerebral at times, forcing you to commit to memory five or six elaborate combinations that must be strung together to keep you alive. In the latter stages it’s not for the faint of heart, especially on the upper difficulty levels.  Enemies will come at you with a number of weapons: shields, boxes, fire extinguishers, guns, knives, stun batons, sniper rifles, you name it.  Each have a specific way to circumvent the attacks, and with many enemies on the screen at one time, it can get a bit hectic.  Though you aren’t without your own weapons.

In a gaming landscape littered with button mashers, Arkham City won’t let you get by that easy.

Batman’s utility belt returns with all the goodies that you would expect from the world’s greatest detective, and some cool new weapons that you’ll uncover along your way.  The famous batarangs, smoke bombs, batclaw, explosive gel, and line launcher return and are complimented with many other weapons that you’ll pick up from characters (no spoilers)  that have serious implications on the gameplay in the latter portions of the game.  Which is where things again get a bit muddled.  There are so many different weapons in Batman: Arkham City,  that can be used in so many different situations,  that it’s hard to keep track of them all.  With many of them having quick use button combinations,  it adds onto the already difficult to remember list of options you have when faced with a group of enemies.  This usually only applies when facing a group straight up.  If you played the first game, you’ll know that Batman: Arkham City is as much about stealth and strategy as it is about brute strength.  Hiding in the shadows to pick your enemies off one at a time, is a much more viable approach for Batman, as he is mortal after all.  But there are many instances when mobs just can’t be avoided.  While the combat is rewarding and very well executed, it can be somewhat overwhelming.  Throw into that equation a camera system that sometimes obstructs your view of your enemies and you can have a downright frustrating experience on your hands. 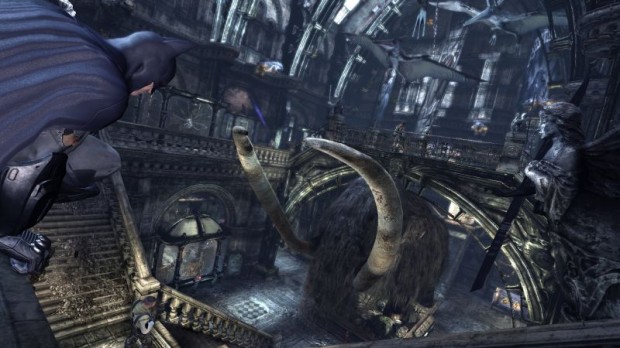 Though many of the small and minor annoyances that can arise are soon forgotten when you take one look at just how beautiful Batman: Arkham City is.  Inside and out, Arkham City is full of character.  The criminals that now inhabit this cityscape  bring it to life with each area having a distinct flavor and personality.  The attention to detail not only in the indoor portions of the game, but the outdoor portions as well, is quite honesty, staggering. Once again though, I fell into the same trap with Batman: Arkham City as I did with Arkham Asylum.  Detective vision is Batman’s advantage in combat and when surveying the world.  You can see enemies, and areas of interest, and because of that I tend to keep it on too much.  Batman: Arkham City is such a good looking game, and I’m afraid that a solid 20% of it was wasted on detective mode, at least by me.  Not so much a complaint as it is a reminder, just remember to turn it off once in awhile or you will likely miss some very good artwork in Batman: Arkham City.

Which is just another reason on top of the long line of reasons to get this game.  It’s been awhile since I couldn’t wait to do it all again in a video game.  Arkham City and it’s New Game Plus mode will likely pull you in immediately for a more challenging playthrough, equipped with all your gear from the first run.  That is, if you managed to see most of what there is to see in your initial playthrough.  For me, my first game ended the main storyline with just over 30% of the game completed.  And that took me roughly 12 hours to complete.  If that tells you anything about the size and scope of Batman: Arkham City’s story mode, it’s that it’s massive.   When or if you finally throw in the towel on the story mode, having seen all there is to see, you’ll have more content still, as the challenges are back and better than the previous game.  Collecting Riddler challenges will unlock new boards from the single player story, and with 72 Ranked medals to achieve and 108 Campaign medals to nab with Batman alone, you’re going to have your hands full.

So if the question was, “Does Arkham City have the same magic”?  The answer is no, it doesn’t have the same magic, it’s a new powerful brand of magic that dwarfs the original in nearly every aspect. If you loved the original, this one’s a no brainer, if you’ve never played the franchise, welcome to comic book video game heaven.